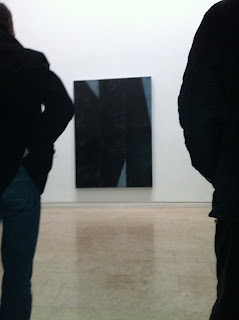 A curious event at the RHA last Wednesday. The amiable Pat Murphy accompanied Charlie Tyrrell around his exhibition and discussed his influences and his methods of working. An unusual insight into the inner sanctum of an artist - and surprising that it came from the famously testy and rigorous Tyrrell.

While nobody was so crass as to mention the challenging nature of Tyrrell's severe abstraction, you did feel that Pat Murphy was struggling for a foothold when he pointed to a horizontal line on one piece and suggested that this could be seen as a horizon line and thus represent the influence of landscape on the work. To Tyrrell's credit he played down this influence - saying that while he "leaves the door open to landscape" he doesn't welcome it in. He did concede that it may subconsciously intrude. He also declared a passion for grey that is influenced by "the grey of West Cork in November". He eschews realism and declared that he is a believer in the "complete contrivance of painting". He also spoke of the importance of "absolute finish", getting it right, citing Titian as an exemplar. You can see this is his perfectly honed images and immaculately presented work - down to the well-crafted wooden boxes in which his aluminium pieces are delivered.

Tyrrell never uses brushes: he just "ploughs on the paint" and then scrapes it off with Japanese spatulas. He wants to break away from the notion of easel painting. Layering and scraping he uncovers his images. "There's a minimalist in me" he declares and cites Donald Judd as an influence. I wouldn't argue wit that - even his titles these days are minimal (C6.10 etc.).
Posted by Ardmayle at 4:36 PM