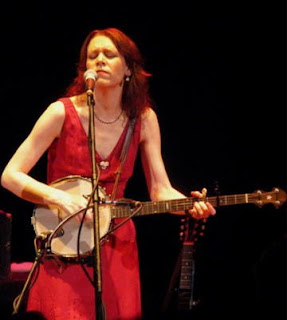 My first visit to the Grand Canal Theatre and I'm impressed. Easy car park access, helpful staff, decent sized bar (designed for interval drinks), roomy seats, and great acoustics and sight lines. I would be happy to attend a play, a lecture, or a classical music event here - but it's way too staid for the kind of music Gillian Welch plays. She needs Whelan's or at worst the Olympia to do justice to the mixture of country, blues, folk and bluegrass she delivers. Shit kicking music needs a grungy venue. At an early stage she chided the crowd for being subdued - a valid complaint but the blame lies with the formal layout of the venue.

But that's a mere quibble for this was the best gig I've seen in Dublin since the last Ry Cooder one. Having been unwell lately I was a bit disgruntled and self-absorbed but I was soon lifted out of it. She ranged over her back catalogue for two hours or so without putting a cowboy-booted foot wrong. I'd mention highlights except every song seemed a highlight - maybe Elvis Presley Blues and Time the Revelator or her haunting version of Neil Young's Pocahontas. Her pellucid voice and her seamless harmonies with her cowboy hatted partner Dave Rawlings were accompanied by some tasty guitar from both of them and the odd banjo interlude. She kept up a charming patter between songs and even treated us to a bit of tap dancing. Great show.

And by the way its Gillian as in gill rather than Jill.
Posted by Ardmayle at 5:25 PM