Ruminations on the Art Market 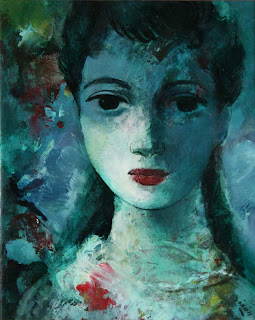 I attended the de Vere art auction in the D4 hotel yesterday evening to take the current temperature of the market. There was a modest crowd - around 170 I'd estimate and a smaller number of lots than usual (127). The estimates for the work were very modest indeed - in general less than 50% of their value during the boom. The auction houses are pricing to sell - forgetting their erstwhile clients who bought for investment. A Felim Egan that sold for €10K about four years ago was estimated at €3K to €5K (although it actually went for €7K), and a large Gwen O'Dowd (42 x 53 inches) at a paltry €800 to €1,200. So bargains to be had.

The market has definitely got more refined and discerning. Bad paintings by well-known artists are not selling and buyers are mostly sticking to the lower end of the estimates. A high percentage of work (around 30%) was unsold - much of it dross. Some highlights: Dan O'Neill was strong, King and Queen going for €27K (€7K above lower estimate) and Jessica for €14K (€4K above lower estimate); a bucolic piece by Frank McKelvey got €20K (€6K above); two standard Paul Henrys just about made their reserves of €60K and €70K; Gerard Dillon was weak and a 3 of his pieces didn't sell; an exquisite Conor Fallon horse in polished steel (the star of the show for me) went for €13K (€6K above lower estimate); the uneven Sean McSweeny and the uneven Tony O'Malley got uneven prices and Teskey and Shinnors hung in there just above their estimates. But the large Gwen O'Dowd painting from her Grand Canyon series at €800 was the bargain of the show. She may not be pleased but the buyer certainly was.

The image above is Dan O'Neill's Jessica.
Posted by Ardmayle at 9:44 AM