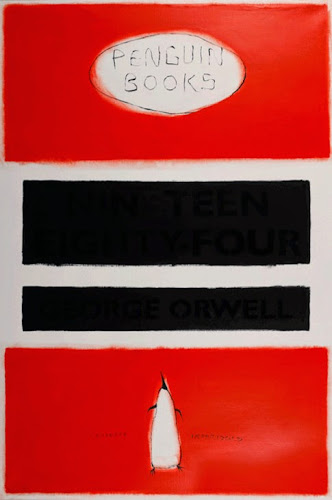 Nineteen Eighty-four by Neil Shawcross
An edited version of this review appeared in the Sunday Times Culture Magazine on 26 October 2014.
Visitors to the Royal Ulster Academy (RUA) annual show from outside Belfast should consider the train. Arriving at Central Station you can stretch your legs by taking a 30-minute walk along a scenic stretch of the Lagan, admiring the doughty oarsmen and women as your proceed. Turn right into the Botanic Gardens and there you'll find the large, spanking new and well-appointed Ulster Museum. The RUA annual show was a moveable feast in terms of location for a number of years but since the Ulster Museum reopened in 2009 it has settled there. There are plans afoot for the RUA to secure a permanent home of its own in a five-story listed building on Ann Street but these will take some years to come to fruition.
Just as the Royal Hibernian Academy's (RHA) annual show gives us a panoramic view of the current state of Irish art, the RUA show provides an overview of what's happening in the North. There are differences in the selection process however. The RUA follow the Royal Academy (RA) model where there's a two stage selection process, rather than the more unwieldy RHA model where there's no preliminary stage. Stage one involves online shortlisting whereby images uploaded by entrants are viewed. About a third of these are shortlisted and then delivered to the Academy for actual viewing. A second selection then takes place and the academy displays around a third of these shortlisted works. There's another major difference with the RHA. The academicians of the RUA confine themselves to two pieces each. (Those over 75 are allowed a third, on the grounds, I suppose, of respect for the venerable.) Their Southern peers at the RHA can take advantage of an entitlement of up to seven pieces. For example at the last RHA show Thomas Ryan and John Behan displayed seven pieces each and others such as Liam Belton and Maeve McCarthy had six. This does tend to unbalance the RHA's annual show and make it less broadly representative than it could be. The Northern show is however smaller in scale, there are 304 works on view compared to 565 at the RHA.

The RUA has existed in one form or another since 1879. It started life modestly as The Belfast Ramblers' Sketching Club. This was the result of an initiative by John Vinycomb, a senior designer at a Belfast printing firm. It started with 16 members of his art department who had been students at the Belfast School of Art. In 1890, with increased membership, it expanded into The Belfast Art Society and in 1930 The Ulster Academy of Arts, with Sir John Lavery elected its first President. Finally, as part of the Festival of Britain in 1951, the Royal prefix was granted by King George VI and it became The Royal Ulster Academy of Arts.

This early link with the Belfast School of Art remains as strong as ever with works by its alumni and graduates making up a high proportion of the show. Southern artists are also well represented. In addition to those who get in through the open submission process, the academy has a policy of inviting a number of Southern artists every year. Those from the south who made it in through one route or another include Amelia Stein, Bernadette Kiely, Francis Matthews (who won the KPMG Young Artist Award), and Tadgh McSweeney. The president of the RUA Colin Davidson has enjoyed the distinction this year of showing at all three academy shows. In addition to paintings at the RUA, and the RHA, his fine portrait of Paul Muldoon was shown at the RA's annual summer show.

Entering the 5th floor gallery, divided into three large rooms, the first thing that catches the eye is Dermot Seymour's Hiberno Hare - a large oil featuring a hare with a bloody wound on its forepaw suspended over a mythic landscape. You may miss the metaphor here but it's a powerful image notwithstanding. Nearby Colin Davidson confounds expectations by supplanting his customary portrait with Cloud - a dreamy and subtle landscape. Photography is very well represented in the show. Notable is a characteristically chilling piece by Paul Seawright which owes much of its impact to its title. In the same room, it's hard not to laugh at Oliver Jeffers Ginger Hitler - as if redheads didn't get enough unjust abuse already. Or maybe that's the point. Leonora Neary's These Rooms Within are two dark, cryptic works that evoke that space where introspection occurs.

Moving into the second room you are engaged immediately by that splash of red that characterises Neil Shawcross. He has two large pieces that dominate the space. There are also two fine luxuriant abstracts by Brian Ferran, one of which garnered him the RUA Perpetual Gold Medal. This room also features Be by Amanda Brooke - a striking hanging sculpture of a flock of birds where the attendant shadows play a prominent role. A couple of the portraits in this room give one pause. If the one of Paul Muldoon set out to be a Dorian Gray version of the poet it certainly succeeded. Nearby the portrait of Andy Irvine seems to have sucked all the strength of character out of that interesting man and left us with a weak-looking musician in a contrived pose. Two photographs by John Roch Simons are amongst the best things on view. These evocative images of an old nun carry haunting suggestions of a life wasted. A couple of quirky portraits also linger in the mind: Sheena Malone's Untitled and Lenka Davidikova's Joker. Francis O'Toole's languorous Dormit, all lush colour and eroticism, would grace any bordello.

The third and furthermost of the three rooms, whether by accident or design, contains some of the weakest work. There are a number of insipid landscapes and a couple of sub-bucolic renditions of domestic animals. There are however some good deeds also in this naughty room. These include Light Reflection and Into the Dark by Sophie Aghajanian and three cool abstract bogscapes by Jean Duncan

In general the sculpture is the least successful part of the show. This is partly due to to unsympathetic way it is displayed. Much of it is laid out cheek to jowl on tables as in a craft shop. Perhaps, given the constraints of the space, it was not possible to display each piece on a separate plinth but the the resultant juxtapositions are often a bit jarring. The highlights include Francis Lambe's Terracotta Sea Bean, Adam May's ceramic Cusp and Kate Mac Donagh's mysterious and elegant Sidhe. Two pieces reward careful scrutiny: Claire Gibson's aptly named Reflections and Karen Gibson's Chernobyl Metryoshka Doll Set - the porcelain dolls depicting scenes that are far from playful.

Print work is well represented. Elizabeth Magill's award winning Venice is impressive and there are two cool and restrained works by Keith Wilson. Sarah Rogers' Return to Hospital and Margaret Arthur's encaustic mono prints Reflective and On Thin Ice also stand out. On the video front those who check out Sizzling Babes may be surprised that the title refers to bacon rather than bathing beauties. They will have to content themselves with watching playful pigs run about oblivious of their date with the frying pan.

Looking back over the Irish art scene for the past hundred years there's an argument to be made that Belfast has been its epicentre. Paul Henry was born there as was Sir John Lavery. In the middle of the 20th century George Campbell, Colin Middleton, Dan O'Neill, and Gerard Dillon all emerged, a couple of them from its meaner streets. A little later Basil Blackshaw appeared - a precocious talent born into a sporting family in nearby Glengormley, This show gives us an opportunity to observe how the sons (and daughters) of Ulster are living up to this illustrious heritage.