After the Titanic - A Life of Derek Mahon by Stephen Enniss 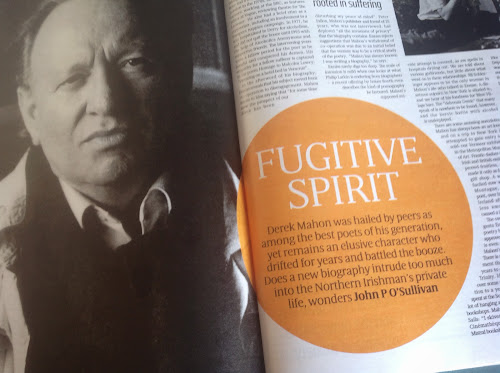 Derek Mahon belongs to a gifted generation of Northern poets that includes Seamus Heaney and Michael Longley - all three born between 1939 and 1941. Unlike his compatriots, Mahon has not enjoyed a smooth ride through life and letters. Heaney moved south in 1972 and went on to enjoy a life padded with tenure and festooned with awards. Longley, a Belfast Protestant like Mahon, stayed put despite the fraught political landscape of the time and made his career in Northern Ireland, working for the Arts Council while writing his verse. After leaving Trinity, Mahon, arguably the most talented of the three, wandered the world for decades, changing jobs, changing homes and occasionally changing women - but all the time producing his sublime verse.

Stephen Enniss in his new biography charts this propensity for flight in such relentless detail that it becomes the leit-motif of the book. It supports his thesis that "the origins of Mahon's art lie in suffering". The book's strength lies in its linking of the various dramas in the poet's life with the resultant poetry. You may not agree with all the assumptions but it makes for an interesting read. The book stops short in 2003 so it doesn't encompass the later settled phase in the poet's life. Since moving to Kinsale permanently in that year Mahon has enjoyed one of his most creative periods. He has produced four collections Harbour Lights (2006), Somewhere the Wave (2007), Life on Earth (2008), and Autumn Wind (2010). Gallery Press published a New Collected Poems in 2011 and Red Sails new prose collection in October. When queried about his premature ending Enniss responded: "I ... felt it would be unnecessarily intrusive to bring Mahon’s life story up to the very present. I chose not to tell the story of his most recent years in the town where he still lives." This is a noble sentiment but it means we don't get any insight into the life of the poet at rest in his Ithaca, or the circumstances surrounding his latest work.

Enniss sees Mahon's personal problems beginning when he went to Trinity. Mahon probably wouldn't disagree describing himself during that period as: "a surly étranger in a donkey jacket, with literary pretensions ... careless of the academic demands". This nod to Camus suggested an early recognition of the absurdity of life and an indifference to worldly matters. During his second year, according to Enniss, he attempted suicide by jumping into the Liffey at Butt Bridge following a "personal crisis". Mahon remembers it differently and in one of the essays in Red Sails makes the comment: "Jump in the river for fun and someone will say you tried to commit suicide". The truth of the matter may be contained in Michael Longley's pithy summing up of the event: "partly theatrical, partly suicidal". Whatever about a personal crisis his studies were suffering and he was suspended from Trinity for a year for "unsatisfactory attendance". He eventually returned, after a spell working on the Isle of Man, and got a modest degree but not one that would have opened up the academic route enjoyed by many of his peers. Trinity did however give him the confidence to follow his star as a poet. Through all his existential struggles he was writing verse and contributing regularly to, and on one occasion editing, the Trinity poetry magazine Icarus.

After leaving Trinity he had an abortive spell at graduate school in London, Ontario. He then drifted for a while as an "undocumented" in the USA taking jobs in a photo shop, a book depository, and boy's boarding school. He returned to Belfast in 1967 and then moved to London in 1970. In the following years he tried a variety of careers. In no particular order he worked for the BBC, was features editor at Vogue, reviewed theatre for the Listener, and had a brief stint as a copy writer (including an involvement in a Pampers nappies campaign). In 1977 he was appointed Writer in Residence at the New University of Ulster and the following year was hospitalised in Derry for his alcoholism. This became a recurring problem over the next 15 years. He finally quit in 1993 with the help of Alcoholics Anonymous and some supportive friends. The years between 1985 and 1995 were a fallow period for the poet as he fought and conquered his demon. His empathy for a fellow sufferer Malcolm Lowry is captured in his poem Homage to Malcolm Lowry: "sweating on a hotel bed in Veracruz". The only publication during that period was the 1992 chapbook The Yaddo Letter.

In the Afterword Enniss tells us how his subject moved from cooperation to disengagement as the book approached completion. Mahon wrote to him saying that "for some time now the prospect of our Book has been disturbing my peace of mind". Peter Fallon, Mahon's publisher and friend for 25 years, deplores "all the invasions of privacy" that the biography contains and believes the book to be "a betrayal of trust". Fallon was not interviewed for the book. Enniss has denied suggestions that Mahon's withdrawal may have been due to his belief that the venture was to be a critical study of the poetry rather than a life. In a recent email he stated that "Mahon has always known I was writing a biography".

Betrayal may be too strong a word. The personal life gets coverage of course but Enniss rarely digs too deep. The scale of intrusion is mild when one looks at what Larkin is enduring from biographers (a recent offering by James Booth describes in detail the kind of pornography he favoured). Mahon's alleged suicide attempt is covered as are the various spells he spent in hospitals drying out. We are also told of the comings and goings of various women but little about what went on in these relationships. Jill Schlesinger appears to be the only one of the women in his life who talked to Enniss. A disastrous sojourn in New York is alluded to and we hear of his fondness for West Village bars such as the Lion's Head, the White Horse, and McKenna's. We rarely get very close to Mahon. The "debonair Derek" that many speak of is nowhere to be found and the heroic and ultimately successful battle with alcohol is underplayed. There are some amusing anecdotes. Mahon has always been an art lover and on a trip to New York he tries to get in to a sold-out Vermeer exhibition in the Metropolitan Museum of Art. Frantic dashes to the Irish Embassy and the British Embassy prove fruitless and our frustrated poet only makes it as far as the gift shop. A whiskey-fuelled row with John Montague over his Northern Ireland affiliations is less amusing - it caused a lasting rift.

The overall tone of the book suggests that the writer loves the poetry but vaguely disapproves of the poet. It's clear early on that Enniss is a bit sniffy about Mahon's academic history. There is the reproving statement that it "took him five years to gain a degree" from Trinity. He also chides Mahon about some myth making in relation his time at the Sorbonne. Apparently the year that Mahon claims to have spent there actually entailed hanging around Parisian cafes and bookshops for a few months. Mahon admits as much unashamedly in Red Sails: "I skived off and hung out at the Cinematheque, at George Whitman's Mistral bookshop, and in obvious pit-stops like the Cafe de la Sorbonne and Au Depart." The life of a flaneur around Paris was surely more apt for the sentimental education of the poet than any series of lectures. It gave him, for example, the leisure to read his beloved Montaigne properly for the first time.

Anyone reading this life will be encouraged to discover or revisit his poetry, and for this Enniss deserves credit. Mahon has been under appreciated by the general public. He is particularly astute on sources and has made good use of the early drafts to which he had access and the many archives he visited. Who would have known, for example, that one of Mahon's best known poems, A Disused Shed in Co. Wexford, dedicated to J.G. Farrell, took its inspiration not alone from The Troubles but also from a passage in one of Farrell's earlier novels The Lung. This, incidentally, is the poem that Michael Longley judged "the best poem any of us has written". Praise indeed when that "us" embraces Heaney.

A poet with a few peccadilloes is hardly a bad thing. Many of us prefer our artists to be free range, "swaggering the nut-strewn road" on our behalf. And in the end the poetry forgives all. Look at a masterpiece like The Sea in Winter, in which he casts a cold eye on his blighted province. Mahon's life as a poet has been a triumph - his legacy is assured. The substantial body of work he has produced has been described by the critic Philip Hobsbaum as "an oeuvre fit to stand beside theirs (Auden and McNeice) in literary history". The man himself is at peace in his safe haven down south. In the final essay in Red Sails, Mahon sums up his current state of contentment:

"As airports grow intolerable and seaplanes remain elusive, there's much to be said for staying put".

If suffering is the key to his poetry, as Enniss asserts, these days it is suffering recollected in tranquility.

Posted with Blogsy
Posted by Ardmayle at 3:08 PM