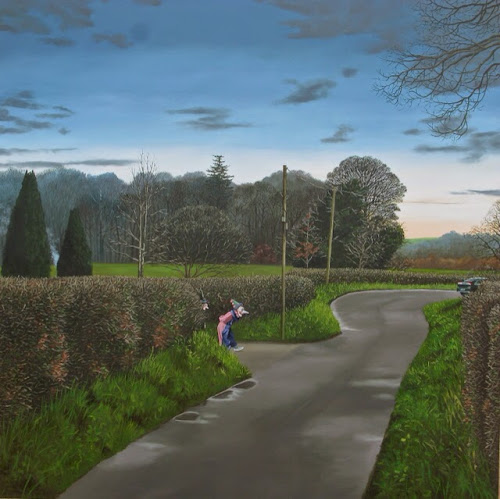 An edited version of this review (with a less horsey bias) was published in the Sunday Times Culture magazine on the 23 November 2011.
A martingale is a device used to control the carriage of a horse's head. There's a delicious irony in the fact that the artist Martin Gale's parents, racing folk, selected such a resonant name for a boy who went his own way and thwarted plans to guide him towards a conventional career. His father hadn't exactly followed a conventional path himself. He was an English NH jockey who worked with Vincent O'Brien, managed a stud farm and became chief handicapper with the Turf Club. Gale senior was educated at Ampleforth College, near the village of Ampleforth where his grandfather was Master of the Hounds. Gale's mother came from an Irish equestrian background in Galway. She rode work for Sir Cecil Boyd-Rochford, the Queen's trainer, during the Second World War when all the stable lads were serving in the forces. She was also the first female jockey to win a point-to-point in Ireland. The only sign of this regal equine heritage is a mounted fox's head in Gale's studio. A souvenir of his father's association with the Sinnington Hunt. However the artist hasn't strayed far geographically from the racing world. His warm and well-appointed house outside Ballymore Eustace, is just a few miles east of the Curragh. Notwithstanding their horsey proclivities the roots to his current profession can still be traced back to his family. His father, clearly a well-rounded man, was an enthusiastic amateur painter and passed on this interest to his son starting with the oil paints he gave him at the age of six. His mother's family were also painters and from an early age he remembers them all making their own Christmas cards and receiving fulsome praise for their efforts. Also, the family home was bedecked with inherited equine art including work by Snaffles and Lionel Edwards. Charles Lamb was a close friend of his mother's family and over the years they acquired many of his paintings. So there was exposure to a variety of art for the budding artist and encouragement to have a go himself. But art for his family was seen as an accomplishment not a career.

Gale's earliest formal education was a spell of private tuition at Vincent O'Brien's home in Ballydoyle, near Cashel, where his classmates were O'Brien's daughters Elizabeth and Susan. (This connection was to surface again later in life when he sold a painting to Kevin McClory, Elizabeth's husband and master of Straffan House.) He moved on to become a boarder at Newbridge College. There he remembers the positive influence of the Dominican Father Henry Flanagan who he described as "a renaissance man" with a particular interest in art. However, his sojourn in Newbridge ended prematurely when he was expelled in 6th Year after being caught while on a nocturnal adventure. Himself and an accomplice had copied a master key and would regularly head off after hours to the local tennis hops. While both were caught, the accomplice, a key member of the senior rugby team, did not share his fate. An injustice that still rankles.

But this expulsion was destiny shaping his ends. His parents sent him to Dublin to complete his secondary education at a crammer called Blackrock Academy on Upper Mount Street. This school was run by the colourful William Martin and contained a motley collection of students, male and female, whose behaviour had been found wanting in more staid establishments. His route to this new school took him past the College of Art in Kildare Street. Gale remembers being impressed by the bohemian brigade that emerged daily from this location. They seemed "freedom personified" to the closeted boarding-school boy. This planted an ambition: "I wanted to be one of them". His father however had other ideas and secured him a job as a management trainee with the Rank Organisation in Phibsboro. Drawn towards Rank's advertising department and its graphic designers he ascertained that the route to such work also lay in the College of Art. This stiffened his resolve and the aspiring artist, after a year of servitude, escaped to freedom and art school in 1968.

While he enjoyed a couple of years of steady, if conventional, tuition there - his progress was arrested by the series of student protests and strikes that brought chaos to his last two years. Formal tuition was disrupted and the students were forced to look after themselves. Sharp-eyed observers of Reeling in the Years can catch a glimpse of Gale amongst protesting art students at the time - sporting a hair style that only Guggi could envy. Some of the teachers stuck with the students. Gale speaks particularly appreciatively of Charlie Cullen. "Carey Clarke taught me how to draw an eye but Charlie Cullen had empathy".

While still at College, Gale had two works accepted for the 1971 Exhibition of Living Art so the tyro artist began to attract notice. Gerald Davis gave himself and John Devlin a two-man show in 1972 while they were both still at college. He was subsequently recruited by Bruce Arnold, who attended his Graduate show the following year, and this led to his first solo show at the Neptune Gallery in 1974. Following the demise of the Neptune Gallery, Gale was keen to join Taylor Galleries, a favoured destination for aspiring artists. He spotted his opportunity after the opening of the Living Art show in 1980. He was drinking with the various attendees in the Henry Grattan on Baggot Street where he espied John Taylor at the bar. Emboldened by a few pints he approached Taylor - a gallerist notorious for being immune to the entreaties of artists - and declared: "I was thinking of joining your gallery. What do you think?". Taylor, perhaps mellowed by his surroundings, surprisingly agreed: "yes, that seems like a good idea" and he was taken on board. In 1982 he was also selected as one of the original members of Aosdana. The cnuas was a great boost to the artist at the time. While he sold well between 1974 and 1980, the following decade was a grim time for artists. He had a growing family and it was a timely supplement to the meagre income he derived from art and driving the local school bus. These days he can comfortably manage without it. "I haven't drawn it for many years".

Martin Gale's has been called a hyper-realist, a super-realist, and even a surrealist. However he prefers to refer to himself as a realist painter and the painters he admires most such as Andrew Wyeth, Edward Hopper and David Hockney are all realists in their own varied ways. Closer to home he feels an affinity with the work of Colin Harrison, another realist. But Gale is a realist with a difference. He does not paint what he sees before him as a photo-realist such as John Doherty would do. It's realism refined and excluding, omitting the fine detail of photo-realism. It's plainly artifice, reality slightly out of kilter - twilight zone in the midlands. In a recent interview Gale explained his modus operandi. "The paintings are all fictions - this is not a slice of reality. I gather a set of ingredients and put them all together". If you look at Guest from his current exhibition at Taylor Galleries all the differing elements that make up the painting were encountered locally and stored in his memory bank for future use. The planes overhead came from observing the Kildare gliding club's activities, the spreading chestnut tree is about 200 yards from his home and the woman in her blue finery was spotted at a wedding a few months earlier - observing perhaps a match she didn't approve of. These disparate elements all existed as separate images that he had sketched or photographed. After they had marinaded in his imagination for a period he brought them together to create this image of something afoot in a rural setting.

A characteristic Martin Gale painting contains a preoccupied figure, or figures, in a landscape. He believes that "people are always drawn to paintings with other people in them". He still paints landscapes and finds them a good way of easing a creative block. "If you're stuck, paint a landscape - it's keeping with the language". His natural habitat is the mid-lands - the area surrounding his home near Ballymore-Eustace where he has lived for over 30 years. His subject matter is rooted in what he encounters on his daily round. He goes for regular walks with his amiable collies and will usually have a camera or a sketch pad with him. There he captures and stores images of the fields, the woods, and the local characters for possible future use.

It's not surprising that Hopper is one of Gale's favourite artists. They share a penchant for inserting preoccupied figures into their paintings - Gale's outside and rural, Hopper's inside and urban. In both cases there is a feeling you are watching a still from an unfolding drama. "I like", he says, "to provide a hint of a narrative without spelling it out" - leaving space for the imagination. Something has happened or something is about to happen. A more overtly unsettling piece from the current show, Halloween - Out Early, illustrates this. It shows two children walking down a country lane - overshadowed by trees and looming hedgerow. One wears a sinister Venetian mask - adding a touch of weirdness. The headlights of a car approach. It's twilight and something wicked this way comes.

When discussing other artists Gale surprisingly cited the Sligo-based artist Sean McSweeney as "a great influence on me". Their styles could hardly be more different. However, Gale admires him for his "love affair with the landscape" and for demonstrating that artists "don't have to be cool and detached". It's clear that Gale shares this passion for his surroundings and is creating a memorable record of his encounters with it.