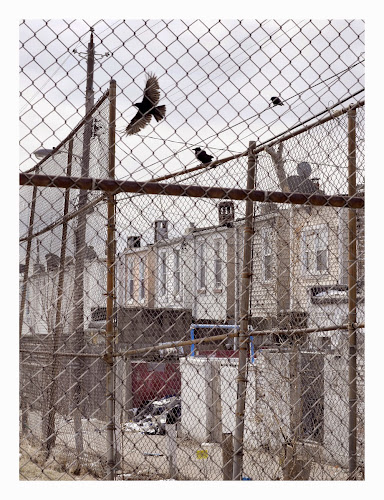 Paul Seawright goes looking for trouble and harvests haunting images from the sites where he encounters it. In the past he has brought us to locations where sectarian murders occurred in the North and to the battle-scarred landscape of Afghanistan. His current show takes us to the rust belt of the USA, those north-eastern and mid-western states where the collapse of the manufacturing industries has left vast swathes of unemployment and hopelessness.The List refers to sexual offenders and Seawright has photographed the areas where this ostracised underclass eke out an existence. The onerous restrictions placed on where they live in terms of distance from schools and other public buildings has the unintended consequence of creating clusters of such people in these areas. Amid the bleak urban scenes and boarded buildings the images frequently contain suggestive metaphors: a stray cat on the prowl, a scrap of blasted vegetation, black birds ominous behind a wire fence. These are scenes from the obverse of the American Dream. A nightmare of ugly mundanity and blighted aspiration.

Posted with Blogsy
Posted by Ardmayle at 11:34 AM