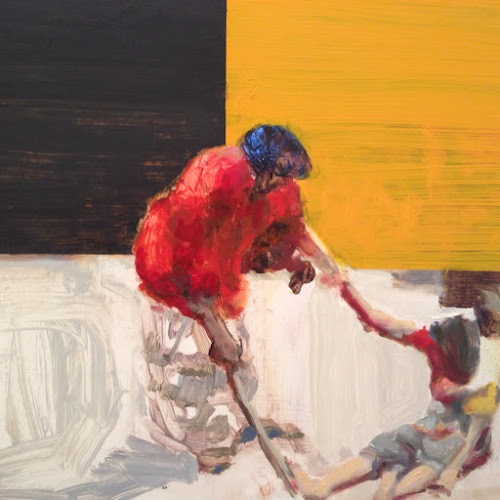 A slightly edited (different last sentence) version of this piece appeared in the Sunday Times Culture magazine on the 31 May 2015.

Fight or Flight is the title of Conor Foy's new show and many of these quietly disturbing pieces are suggestive of violence just past, or pending. Foy's work is based on images from the news media or from camera phone footage. He harvests elements from these online sources to create his subtle and resonant paintings. The artist, an NCAD graduate based in New York says: "In these pieces, painting's stillness is used as a meditative counterpoint to the rapid fire of news media." A number of the paintings such as Down 3 feature what look like dead bodies and others contain kneeling figures who seem to be awaiting or undergoing punishment. The titles such as Stick, Down and Guidance are cryptically suggestive. While the overall sense is that there's not much good news here, we do have plenty of room to speculate as to the exact nature of the bad news. Guidance 3 looks like the prelude to a beheading, but maybe it's just going to be a beating. Three of the pieces are entitled Muybridge after Eadweard Muybridge famous for his photographic studies of animals and men in motion. The ambiguous Baconesque images in these paintings are both a homage to that artist and an acknowledgement of his debt to the pioneering photographer.