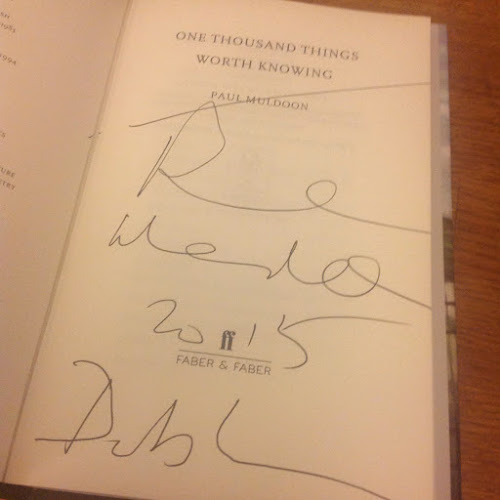 Paul Muldoon arrives in our midst festooned with titles and awards - Pulizer Prize winner, Professor of Poetry at Princeton, and Poetry editor on the New Yorker amongst tthem. He's the nearest poetry has to a rock star so I was was a little surprised that the venue was only half full. I'm not sure the event was well publicised - a number of people I spoke to subsequently were pissed off that they hadn't heard it was on. He was introduced by the General Secretary of the INTO - confirming perhaps that notion that poetry was something you did at school. He's not looking very well - a bit pale and dishevelled and although he's dressed in black there's no hiding that substantial paunch. His greying hair has lost that Phil Spector look and is now just artily tousled. He apologises for his regular sniffling which he attributes to a rapeseed allergy.

He's a practised and proficient performer - starting with the old lecturer's touch of taking off his watch and laying it on the podium so he can discreetly monitor the time. He's at home on the stage and moves around easily, interjecting little quips both between and even within the poems. At one stage he comments that a particular poem "goes on a bit". He speaks slowly in a mellifluous Northern accent and pauses regularly for dramatic effect. His poetry is witty, worldly and intelligent. He likes repetition, no surprise in someone who dabbles in rock music. I particularly enjoyed The Old Country, Muldoon's catechism of cliches:

His latest collection (One Thousand Things Worth Knowing) contains a fine tribute to Seamus Heaney - Cuthbert and the Otters - but he chose to omit that and gave us Cuba (2) from the same book ("I'm hanging with my daughter") which seems to me a strained and inferior poem. But that's a mere quibble. All in all it was an entertaining performance from a polished and urbane poet.

He gives us a bare hour and is definitely not up for an encore. There's books to be signed. His signature is a minimal scrawl and he doesn't really engage with anyone - moving the queue along briskly. I ask him why his eyes are closed in his recent RA portrait painted by Colin Davidson - very unusual for Colin's work which tend to focus on the eyes. He pauses slightly and then replies that "you'll have to ask Colin". The line must keep moving I suppose. These signings are ghastly affairs with eager punters colliding with jaded writers and I feel sorry for all concerned. Nonetheless the impression I got was of a professional operator, conscious of his status, going through the dutiful motions. Or he could of course just be badly jet-lagged and we got him on an off day. Whatever - the poetry forgives all.

Posted with Blogsy
Posted by Ardmayle at 9:49 PM