Eilís O'Connell: Profile of the Artist 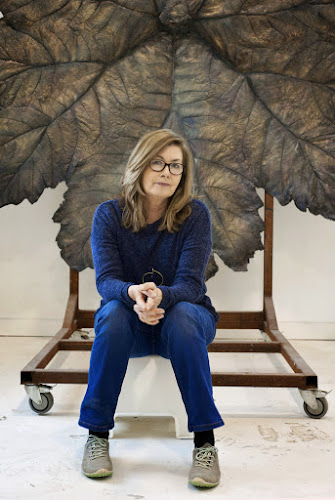 A slightly edited version of this article appeared in the Sunday Times Culture magazine on the 3 May 2015.

You turn right off the Inniscara Road between Cork and Dripsey to get to Eilís O'Connell's studio - a converted creamery perched on a hill. The large and handsome steel gates open into a property well-furnished with examples of her formidable art - a stern woven steel piece here, a curvaceous purple and blue creation there. Their presence a surreal shock against the lush green backdrop of the Lee Valley. In this bucolic location one of Ireland's most successful artists creates her internationally acclaimed sculptures.

When the history of Cork's philistinism about art is being written, the saga of Eilis O'Connell's Great Wall of Kinsale will surely merit a chapter. The desecration of her 1988 sculpture has been well documented - the local council (amongst many other transgressions) painted over her corten steel structure despite her specific instructions not to do so. She is still angry nearly 30 years later: "It was torture, the whole thing was torture. I get physically ill passing it." During the subsequent controversy she had stones thrown at her, her car tyres slashed and was even refused service in some shops by the good citizens of Kinsale. It's ironic indeed to look over her career since that protracted debacle and see that the offending sculpture proved to be the foundation stone for her success at home and especially abroad. It was responsible for her winning the competition that led to her monumental Secret Station in Cardiff Bay. "I was taken seriously in Britain due to my 1988 piece The Great Wall of Kinsale. They could see that I worked big. They loved it, and I got great credit for it."

Her string of subsequent high-profile commissions in the UK include Vowel of Earth Dreaming its Root, in London Docklands and the award-winning Nyama in Bishopsgate. She has particular affection for her playful Pero's Bridge in Bristol. "That bridge is mad." She sees it occasionally as a backdrop in English TV programmes. "I get such a kick out of that." She also continues to reap a rich harvest internationally. In 2002 her large bronze Unfold was lent by the Cass Foundation to the Venice Biennale and her smaller sculptures were shown at the Guggenheim Museum. She has also shown at the Paris and Sao Paolo Biennales and is currently trying to finalise a large project in Hong Kong. Leaving Sean Scully to the Americans, there is a very strong argument for declaring her our best-known and most successful artist on the international stage. She hasn't been idle at home either. Since moving back to Ireland in 2002 she has completed Reedpod a 13.5 meter sculpture for Lapps Quay in Cork and her recent polished mirror steel tribute to E. S. Walton in Trinity. She is amongst the blessed of Aosdana, a founder of the Cork Sculpture Factory, a former member of the Arts Council and a long-standing member of the RHA.

Born in Derry, O'Connell moved to Cork with her family when she was ten. She always wanted to be an artist (three of her uncles painted) and pestered her parents to send her to art classes at the Crawford College of Art when she was 12. Later studying at the Crawford she came under the influence of the sculptor John Burke. He was a charismatic and influential teacher and an enthusiast for the hard-edged abstraction of David Smith. Burke's own career was dissolved in alcohol - a not uncommon fate for a visual artist in Cork. O'Connell's early work was influenced by Burke's modernism but she evolved into her own woman - with a sensibility more drawn to organic forms. She remains grateful for the encounter however, recalling with a smile his shouting "the fucking worst show you ever did" across a crowded Hendrik's Gallery opening. A typical Burke incident. Another Cork artist who influenced her was Maurice Desmond - for the example he showed her in living the life of the artist without compromise. "Maurice was the only full-time artist in Cork at the time. He showed me that it could be done." After a distinguished student career, various awards and fellowships followed. She was determined to broaden her horizons: "As a young artist I was always desperate to get out of Ireland." She was granted a fellowship at The British School at Rome in 1983, and a P.S.I. Fellowship for New York from the Irish Arts Council in 1988. After New York she won a two-year residency at Delfina Studios in London. "Delfina Studios were amazing, every 6 months we had to open our studios and I got to know people very quickly and started applying for shows and commissions." She ended staying in London until 2002 - settling in Deptford. Then a tragedy disrupted the smooth flow of her career. In 2001 her long-term boyfriend Herbie died suddenly. She was thrown by this event: "I had never been unhappy before". She felt the need to return to Ireland and to the support of family and friends. For a while she couldn't work: "I did feel that I'd never make another thing." But eventually she got back to work (completing a gravestone for Herbie) and adjusted to her new life. "I have discovered that solitude was the making of me." Although back living in Ireland, O'Connell has no romantic notions about the place. She doesn't particularly embrace being Irish: "My nationality is not an issue - I feel European." She maintains that "Ireland is a very hard country to be an artist in."

There are two strands to O'Connell's career as an artist. In addition to the public and monumental side that makes the money, there is the smaller work that is best demonstrated by her critically acclaimed Haptic show at the RHA in 2011. Her larger works are created in her spacious well-equipped studio and adjacent barn. She is the first artist I have ever met with her own fork-lift. She also has a small studio on Crete where she creates smaller hand-worked pieces.

"The quality of light there is incredible and the silence of no power tools, I look at everything in a different way. I have no materials only the local amazing beeswax, in a way, the limited resources have given me great freedom."

She always thinks big - seeing virtually all her small pieces as scale models for larger works. "Almost every single thing I make is a model for something that could possibly be made big." Her public work she sees as a way of counter-balancing the ugliness of much modern development. She describes her large piece in London's docklands as "an organic antidote to a very ugly location". She prefers her work outside in the real world - subject to ageing and weathering. "In a museum it's like still being in the head." She sets a lot of store on the after care and maintenance of her public work and bemoaned the appalling state of John Burke's graffiti bedecked sculpture at the Wilton roundabout in Cork. "We have a whole culture of non-maintenance."

It's hard to pin O'Connell down to any particular style or school. There's a hint of Brancusi here and a touch of Henry Moore there (look at Sacrificial Anode in her Haptic show) - and now and then she goes back to her more hard-edged mentors such as David Smith and her late tutor John Burke. She is a restless and eclectic artist often just going where her experiments with materials take her. She is constantly playing with the possibilities of bronze, steel, epoxy resin, mirror polished stainless steel, and even Kevlar - the carbon fibre material used in bullet-proof vests. She once took possession of 1.5 kilometres of stainless steel cable. After leaving art college she worked for a while with hand-made paper - a medium she revisits occasionally. A striking example can be seen in the upcoming RHA annual show. She does what she feels like doing and what she did yesterday may be radically different to what she does today. She refuses to be a predictable, easily marketed product and pours scorn on artists like Tony Cragg who "keeps doing the same thing because he has to supply 55 galleries".

Most of the small bronzes in O'Connell's current show in Hillsboro Fine Art originated in Crete but were finished in her Cork studio. Some suggest teepees and she concedes that "the forms are about refuge and shelter". But she is impatient with those who look for metaphor or meaning in any specific work: "It has no significance whatsoever. It's just a yoke." A statement that typifies O'Connell's lack of arty preciousness. The title of the show is Khôra - a particularly slippery Greek term. You can travel from Plato to Derrida for a definition and still be none the wiser. Perhaps Martin Heidigger's formulation is the most applicable: a "clearing" in which being happens or takes place. O'Connell's work is equally difficult to define. She cannot be confined to any particular "ism". It is abstract but often with figurative resonances. It is classically severe but often with sexual intimations. Perhaps it's best to conclude that her sculptures exist, like Platonic forms, purely as things of beauty for our restful contemplation.

Posted with Blogsy
Posted by Ardmayle at 3:15 PM