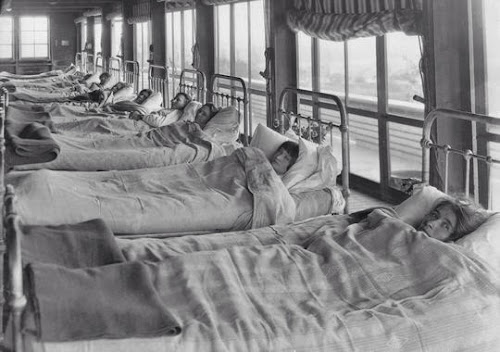 A slightly edited version of this tragic saga appeared in the Sunday Times Speakeasy seection on the 17 May 2015.

When I was around seven I started fainting a lot. It would often happen in school – without warning. I remember once crumbling to the ground from the steps at choir practise. Doctors were called and tests ensued and I seemed to be in bed a lot. Then out of the blue, without discussion, or much ceremony I was whisked off to sanatorium in Foynes – about a hundred miles away. There I was to stay for a year on my own without a single visit from my mother and one brief one from my father. Apparently I had been struck down with the socially dubious and highly infecctious TB. The lack of visits being due not to parental indifference, but rather to the danger of catching it from me and wiping out the entire family. Neither of my parents ever referred to my condition as TB – if my mother referred to it at all it was always that "he had a spot on his lung".

I had a lot of grapes when I arrived in Foynes and I remember thinking initially how friendly the nurses seemed to be – sitting chatting at the end of my bed and steadily working their way through my precious fruit. One was a statuesque brunette (Nurse Burke) who had achieved some local fame by going out with Tony O’Reilly – then a young rugby hero. Thereafter I saw very little of these friendly nurses apart from the brisk commerce of the daily round.

The wards were enormous barn-like rooms with high-ceilings and huge windows all along one side. These windows were kept open through all the seasons – no doubt the sea air was seen as beneficial to our poor tortured lungs. There were about twenty beds in these wards occupied by boys ranging from three to sixteen. The biggest problem was boredom. There was great commerce in comics and for a while I was able to trade my regular consignment of 64 page cowboy comics that were in vogue at the time. We were all sports mad and I can remember listening to boxing matches on concealed radios long after lights out.

I never felt particularly ill and so was tempted out of bed regularly. We would bundle up a newspaper and play improvised rugby up and down the ward. The nurses were unimpressed with these antics and if you were caught the punishment was to confiscate your pyjama bottoms – a particularly cruel deprivation for a pre-adolescent boy. And a surefire way to keep him in bed. The embarrassment of having your bed made as you squirmed to cover yourself was meant to give you pause the next time you planned a rugby adventure. You usually got your pants back the next day. However I was a recidivist and spent more time without than with my nether garments. It became so much of a problem that the ward sister decided to escalate and I was condemned to spend a week in the baby’s ward. This was a special hell involving the public humiliation of being the only non-baby in the ward and the constant sleep deprivation of trying to sleep in a ward full of screaming babies.

When Christmas came there was no visitation from my family but instead the Red Cross came around and we all got substantial presents. I was given a large sub-machine gun with a handle on the side that you cranked to make a convincing noise. I had great fun running around all day shooting my fellow-patients. The pants law was revoked for the day. However, on Stephen’s Day all the toys were collected and stored away – and despite numerous requests we never saw them again. I still miss that gun. I was devastated for weeks afterwards.

After a year or so, for no apparent reason, my father arrived at the hospital and I was taken home. The whole thing was mysterious to me. I never felt sick and therefore was much aggrieved to be stuck in hospital. I felt no different on the day I was admitted to the day I came out. Perhaps the sea air had healed my damaged lungs. When I returned home it was never spoken of. I resumed school and soon began to take part in all the sporting activities normal to a boy of that age. The fainting had stopped.

Posted with Blogsy
Posted by Ardmayle at 3:32 PM