George Campbell and the Belfast Boys 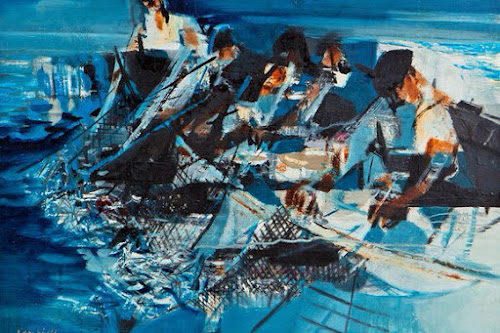 This piece was originally published in the Sunday Times Culture magazine on the 12 July 2015.

George Campbell has been a slightly neglected figure in Irish art. Rebuffs from establishment critics, rows with influential dealers, and snootiness about his self-taught origins all played a part. The Spanish thought enough of him to make him a Knight Commander of Spain and named a roundabout after him in Malaga. Adam's popular Summer Loan show series, now in its sixth year, provides the public with an opportunity to view little-seen seen work from Campbell and his Belfast friends Gerard Dillon, Dan O'Neill and Arthur Armstrong. The show is curated by Karen Reihill, who also wrote the illuminating and copiously illustrated catalogue essay. Campbell lived six months of the year in Spain for much of the second half of his life and the paintings reflect his dual locations with scenes from Ireland vying with his more colourful Spanish output. Contrast Bullfight with the chilly Howth Harbour. Studies of musicians abound reflecting Campbell's live-long interest in music. We also see some rare work from the Troubles featuring gas masks and riot shields. While Campbell dominates the show, there's an abundance of riches elsewhere: Connemara Dream a late Gerard Dillon, Girl from the North by Dan O'Neill and Arthur Armstrong's Little Girl with Pram. In addition to the paintings there's a host of fascinating letters and photographs of the protagonists and their circle of friends.

Posted with Blogsy
Posted by Ardmayle at 4:21 PM