He'll Be on the Fiddle, I'll be on the Brush 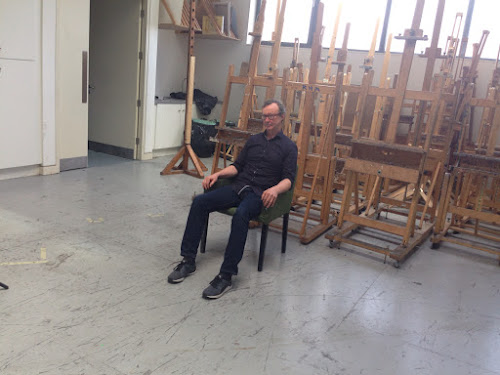 Mick O'Dea, a founding member of the Independent Artists group, caused consternation amongst his fellow contrarians when he accepted the offer of membership of the RHA in 1993. "Nobody had ever elected me to anything before so I said why not." His friends were horrified: "It was the equivalent of someone taking the king's coin in their eyes or a doctrinaire Republican becoming a Free Stater." A hint there of another volte face by another man associated with East Clare. O'Dea has no qualms about his defection. He describes the current RHA "as being an amalgam of the Living Art, the Independent Artists, with a touch of the old Oireachtas" and believes it has absorbed the diversity promoted by those organisations. This seems a valid assertion when you consider the range of exhibits and styles in the recent annual shows, although traces of the old academy still linger in those leaden formal portraits and in the occasional bouts of incest where academicians paint each other. O'Dea's recent elevation to the presidency of the RHA follows 30 years of energetic engagement with the Irish art scene both as artist and teacher.

Born in Ennis, O'Dea inherited a work-ethic from his parents who from modest origins built up a business encompassing a pub, a grocery shop and a farm. An influential art teacher, Jim Hennessy, at St. Flannan's College pointed him in the direction of NCAD. He chose to avoid the more obvious choice of Limerick College of Art as he knew that being so close to home would entail pub duty at weekends. "I wanted to get as far away from Ennis as I could." Following graduation at NCAD he immediately began teaching night classes there and took part time work elsewhere including King's Hospital and St. Edmundsbury Hospital - the mental health facility. He was involved with Brian Maguire and Theresa McKenna in setting up and teaching the Art in Prison programme and for a period taught art to both the Provisionals and the INLA in Portlaoise. He also taught at Dun Laoghaire College of Art for five years. All the while O'Dea was painting and honing his talent but was biding his time. "All my work in education ensured that I wasn't dependent on the art market and could develop my voice as an artist free from commercial pressure". But he was determined not to turn into a full-time teacher by succumbing to the siren call of the pension. He was given the perfect opportunity when he was elected to Aosdana. The resultant Cnuas cut him loose and in 1999 he gave up teaching and became a full-time artist.

This has been his life since that date. It hasn't always been easy. "For me the boom time wasn't a particularly good time. My main way of surviving has been portrait commissions." This uneasy survival is reflected in the number of galleries he has been associated with. After leaving NCAD he was keen to show at the Lincoln Gallery where fellow Independent Artists gathered. However after a few group shows he wasn't offered any further encouragement and through the efforts of Charlie Brady he got his first solo show in Taylor Galleries in 1983. It was very successful: "Dr. John Cooney came in and he bought a swathe of them. I took it for granted. This is what happens." The exhibition consisted of landscapes and rural scenes including cattle. His parents had always been supportive of his career choice but this success particularly resonated with his father. "When he thought of the time and effort he had to put in getting a bullock ready for market and compared it to the money I made from a painting of one he decided there must be something in this game." But disillusion was to follow this auspicious start as subsequent shows attracted scant attention and he decided to change galleries when Taylor Galleries was slow to schedule a new show. He moved on to the Rubicon for a period and following his election to the RHA he began to show at that venue. He also found a sympathetic home at the Kevin Kavanagh Gallery and has been showing with him for the past 14 years - culminating in his striking trilogy of exhibitions dealing with the aftermath of the 1916 Rising: Black and Tan, Trouble, and The Split.

One of the reasons for O'Dea's erratic relationship with commercial success may be his insistence on trying new things. Many successful artists, in Ireland and elsewhere, have a signature style so that when you buy a piece its recognisable as being by that specific artist. Everyone, for example, recognises a Felim Egan. With O'Dea it's not so easy. You might get get toy soldiers, confrontational nudes, portraits, historical tableaux, landscapes and even cardboard sculptures. "My model was always Picasso" he says in explanation of this eclectic approach. "I liked the way that after Cubism he moved on to neo-classicism." Despite O'Dea's cleaving to the academy his artistic influences are from further afield. While his work is figurative he doesn't look to Orpen or to Keating but rather to German Expressionism - especially Kokoschka, Auerbach, and Schiele. The first-named perhaps predominates as an influence but Édaín, an expressive and sexually frank series of nudes he did in 1998, is positively Schielesque. By way of contrast he has a fine portrait of Brian Friel in the National Gallery.

A recurring feature of the Irish art landscape is the bitter chorus of disaffected artists whose work has failed to make it into the annual RHA show. O'Dea is very open about the matter. "It's very difficult to get in." This year there were 2,600 works submitted and only around 14% got through. These made up around 60% of the show. The other 40% is made up of work by the academicians and selected artists. The latter group is selected by the council that oversees the annual show. One of the benefits of having selected artists is that they tend to submit larger works knowing that they will be accepted. "otherwise the show would look like a stamp collection". O'Dea sees the occasional rejection entailed by the process as being part and parcel of an artist's lot. He points to his own experience with the Royal Ulster Academy (RUA). "In 2011 I was an invited artist. In 2012 I was an adjudicator. In 2013 I won the RUA Portrait Prize. In 2014 I was rejected. In 2015 I will submit again." A lesson there for all artists.

O'Dea's no nonsense approach to art is refreshing. He brings a rural authenticity into an area where urban preciousness often thrives. His impending gig at the Kilkenny Arts Festival is an exercise in demystification. It is also an indication of someone who is comfortable in his own skin and confident in his craft. For two weeks he will attend various events (concerts, plays etc.) and set up an easel to record the performers during the shows. "I'll be an embedded reporter using drawing as a media." The day after the performance he will select a participant for a more detailed painting in the studio he has set up in James Stephens Barracks. The studio will be open to the public for one and a half hours each afternoon from 9-16 August. He has already lined up Garry Hynes and Dearbhla Molloy for these sessions. He also hopes to enlist his cousin the fiddle player Martin Hayes who's performing at the Festival. "He'll be on the fiddle and I'll be on the brush." His finished portraits and sketches will be on display in a range of venues around the city.

Seeing O'Dea looking healthy and energetic in his RHA studio it's difficulty to imagine that it's just over a year since the horrific accident that nearly killed him. A pedestrian absorbed on his mobile phone walked out in front of his bike on O'Connell Street. O'Dea slammed on his newly serviced brakes and was sent somersaulting over the handlebars. He landed on his back and ruptured his spleen. Only the proximity of the Mater Hospital and some quick thinking fellow cyclists saved his life as he had suffered a massive internal bleed. Apart from having to take care of himself a bit more (" I mind the drink and take a small daily dose of antibiotics") there are no long-term effects. "I feel that I've had another chance in life." He had no hesitation in taking on the demanding role of President less than nine months later. "I feel that it's a very worthy endeavour". He sees the RHA as "a strong, robust institution run for artists that is trying to get the best artists as members." This is not always possible. When I queried the omission of certain artists from the roster of members he responded that: "Being elected to the RHA is not just an honour like being made a member of Aosdana. Now that you've been elected you must roll up your sleeves." Participation in the activities of the RHA is "an absolute requirement." This doesn't suit certain artists. O'Dea himself set a sterling example by becoming the first Principal of the revived RHA School in 2006. He is determined to make things happen during his term in office. In addition to engaging with a younger generation of Irish entrepreneurs to help reduce the RHA's considerable loan burden, he is keen to expand the programme of events in the building in Ely Place by developing the extensive basement area. He also sees his role as someone who will raise the profile of art in Ireland where he feels it lags behind other art forms through media neglect. He bemoans the absence of a supportive figure like Mike Murphy. "Within the popular media there's a general dumbing down and an omission of the visual arts - a lot of it has to do with the presenters and their priorities. We don't have a BBC4 to counteract this. There's no visual arts on the Saturday shows." He would like to see artists like Imogen Stuart contribute to the national debate. "She has a lot to say." So has this hard-working son of County Clare whose robust stewardship at the RHA should help raise the voice of Irish art and claim back some of the territory ceded to the more aggressively marketed arts.

Posted with Blogsy
Posted by Ardmayle at 10:43 AM