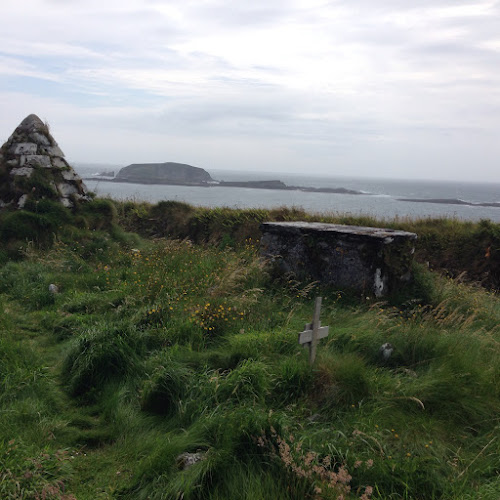 An edited version of this review was published in the Sunday Times Culture magazine on the 16 August 2015.

When you roll into Castletownshend it's inevitable that you'll end up at Mary Anns, down the hill near the harbour. This award winning pub is presided over by Fergus O'Mahony who also runs the Warren Gallery upstairs - named after a local art patron. You can enjoy his sea-food surrounded by fine art and finish up with a tour of the current show. Your host's infectious enthusiasm for art is reflected in the rash of red dots visible.

Kelly who is feted in Melbourne and Sydney, and has a show coming up in New York, is less-well known is this country, despite living here for more ten years. While he made his name as a sculptor he has focused more on painting and print-making in recent times. He likes to get out and about. The striking series of images of Castlehaven were painted plein air from Ceim Hill and the stark studies of High and Low islands were captured from a perch in Myross Cemetery (see photo), overlooking the Atlantic. This exposure to wild and windy West Cork would have toughened him up for his recent expedition to the Antarctic where he also worked outdoors. While the bulk of the show features seascapes from around his current home, the Southern Ocean adventure features in a beautifully minimal etching of a penguin and two carborundum prints of giant icebergs.

Posted with Blogsy
Posted by Ardmayle at 2:59 PM