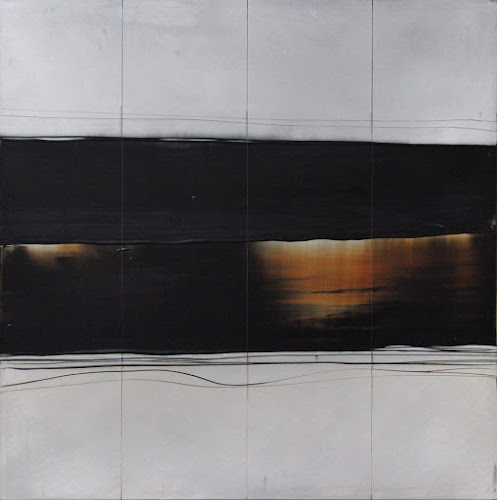 An edited version of this piece was published in the Sunday Times Culture magazine on 30 August 2015.

It's fitting that the West Cork Arts Centre has honoured the memory of Jim O'Driscoll, naming its ground floor gallery after a man who was an indefatigable supporter of art in the region. It's a shame it refers to him as "James" however. He was known as "Jim" throughout the art world - and the legal world. He would have loved to have been around for the current exhibition where Charles Tyrrell, who he much admired and collected, continues his manoeuvres on aluminium. Tyrrell refers to his painting as "a dance within a structure". The metal is engraved with a grid and then scored loosely - allowing the paint to circulate sinuously. When we view Tyrrell's work we keep looking for signs of the spectacular landscapes and seascapes around his home in Allihies. An easy option he righteously avoids. He works from a studio with only a skylight - like Ulysses negotiating the Sirens. Occasionally we think we've caught him with his defences down - as in A5.15 (above). That's surely an elegiac sunset over the Atlantic framed within a dark coastline. Also, a number of the smaller pieces with their strong horizontals contain intimations of landscapes. But mostly this stern, stately, abstract work exists in a realm beyond the painted veil of mere appearance.

Posted with Blogsy
Posted by Ardmayle at 12:37 PM