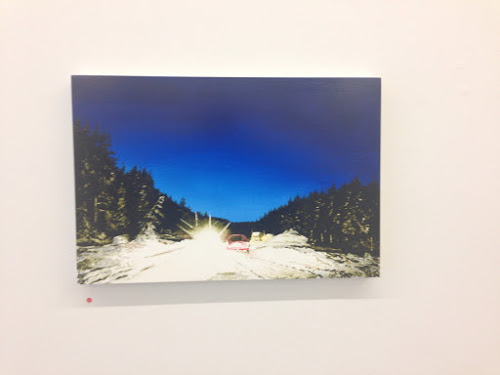 The title of Oliver Comerford's new show, The Longest Road, invites speculation. It could merely refer to his extensive travels during which he takes the photographs that underpin his paintings. Or it could perhaps refer to another kind of journey. A journey beginning and ending in darkness with occasional flashes of light in between. Such is the suggestiveness of these atmospheric works. Comerford selects a group of images from the thousands harvested on his road trips and uses them as the foundation for a coherent set of paintings. These are not photorealist exercises. They are more about recreating the mood of a passing instant than of capturing the minute physical details of place. They reflect the artist's experiences as seen through a car window, darkly. There's a sense of alienation and isolation in these works. It's mostly dusk, a distant glow in the sky is being overtaken by darkness. Oncoming cars approach blindingly. A smudged moon illuminates the indifferent landscape. An ominous mountain looms, a road curves into the unknown, a troubled river threatens. These are glimpses of an evanescent world. We are just passing through.

Posted with Blogsy
Posted by Ardmayle at 4:28 PM