A Cold Eye on the Revenant 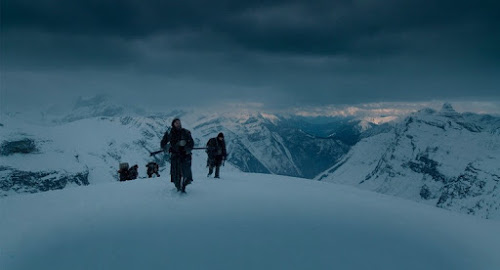 I went to see The Revenant at the IFI yesterday and found it disappointing. It is an intense and visceral experience in places and there's no denying the spectacular beauty of the landscape - mostly Alberta, and Montana with the south of Argentina thrown in for its snow. But the story that drives the action is too thin and basic for my tastes. The bulk of the film involves Leonardo Di Caprio, with appalling injuries, dragging himself through a snowy landscape. Apart from not believing a word of it, the whole thing goes on too long. In addition to his initial bloody encounter with a bear (amazing sequence that), his journey is punctuated with regular eviscerations. Amimal lovers will be discomfited. We get some horse butchering, some buffalo butchering and lots of people butchering. I'm really way too sensitive to be exposed to the steaming innards of large beasts not once but twice. I also had real trouble following the dialogue. As Di Caprio mostly grunts because of his terrible injuries I shouldn't blame him too much, but Tom Hardy sporting some peculiar (vaguely Canadian?) accent had no such excuses. Speak up lad. Mind you it's hardly a movie where the dialogue matters too much. Domhnall Gleeson seems too boyish to be in charge of an outpost of hunters and desperadoes in those benighted territories at that time but at least I knew what he was saying. Visually it was stunning not just because of the scenery but for various other set pieces such as a surreal deserted church, a giant pyre of buffalo skulls and the whole accumulation of period detail in the costumes and buildings. But by the end I was bored. Also, I was never a big fan of mystical visions so they didn't help. Di Caprio will probably get an Oscar for taking on such a physically demanding role and for the finest piece of sustained grunting since Marlon Brando did the Godfather.

Posted with Blogsy
Posted by Ardmayle at 3:31 PM