Review of: John Behan - The Bull of Sheriff Street 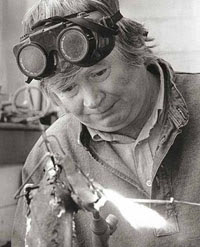 Anyone seeking prurient details of bohemian antics a la Francis Bacon or Ted Hughes will be disappointed by this short biography of the sculptor John Behan. The discretion about his personal life is so absolute that we are not even told the name of his first wife. A footnote tells us that "the spouse of John Behan wishes not to have her name appear in this book" - a restriction that draws unnecessary attention to a banal fact. It's well known he was married to the artist Constance Short so why bother omitting it. Frazier undertook the book as a way of helping Behan deal with the death of his partner Emer McHale in 2012. He describes it as "a work of recuperation" in which Behan's friends "would get a nod to help out". So it would be churlish to chide it for being no more than it sets out to be - an entertaining tribute to the genial artist. However, along the way it succeeds in providing a fascinating insight into the politics of Irish art during a fraught and transformative period.

Although many would associate Behan with Dublin, and particularly the Project Arts Centre, he has lived in Galway since 1980. He made a lasting mark on the cultural life of the capitol in a number of ways before he moved west. The scion of a corner shop on Sheriff Street, he left school at 15 to serve a seven year apprenticeship as a metal worker. Playing with metal stirred some artistic impulse and he enrolled in night classes at NCAD in 1957. In 1960 a bronze bull of his was accepted by the Irish Exhibition of Living Art (IELA) and his career was on its way. The critic James White admired its "simple and witty conception". Subsequently he went to London and later Birmingham to work. The money he earned through working seven days a week meant that he could return to Ireland and pursue the artistic life. He never returned to structured employment. While in London he encountered the work of artists such as Henry Moore, David Smith, Elizabeth Frink and Michael Ayrton. These were influences that were to play a significant role in his evolution as an artist. He was particularly taken with the methodology of David Smith which showed him that being a metal worker was "an avant-garde advantage".

By far the most interesting aspect of the book is its account of the art politics of the 60s where the indifference of the Arts Council, and the cosy restrictiveness of the RHA and the IELA led to frustrated outsiders such Behan and Michael Kane having to find their own way of gaining the public's attention. Behan was part of a loose movement that included Kane, Brian Bourke and Charlie Cullen. They were working-class lads who felt excluded by an art establishment in general and the Arts Council in particular. That organisation was dominated by the architect Michael Scott and its director the colourful Fr. Donal O'Sullivan. The latter with his shot silk waistcoat and his personal wine cellar comes in for particular criticism. When he wasn't sharing a mistress with Graham Greene he was presiding over the Arts Council's buying policy which favoured the ethereal compositions of Louis le Brocquy and the decorative abstraction of Pat Scott (who was employed by Michael Scott at the time) rather than the rough, expressive figuration of these uncouth boys. The critic Brian Fallon described its policy as "arbitrary and exclusive to the point of cliqueishness", and excessively skewed in favour of abstract art "because it is abstract".

Behan was a prime mover in a number of initiatives to redress the perceived injustices suffered by him and his fellow outsiders. He was involved in the creation of the Project Arts Centre in 1967 and was the first artist to exhibit there - a collection of lithographs. He was also a major figure in the Independent Artists group which instigated its own annual exhibition as a reaction to the hegemony of the Protestant matrons who dominated the IELA - formidable figures such as Evie Hone, Mainie Jellet, Anne Yeats, and Norah McGuinness. One of Behan's most significant contributions to Irish art was his creation of the Dublin Art Foundry in 1970. Before this initiative Irish sculptors had to send large work to England to be cast. This often took many months as they waited in line behind Moore, Ayrton and the other big names of that era. Behan initially pitched the idea to the Arts Council but the elegant Father O'Sullivan who had "a hatred of sculpture" rejected his plans. Behan carried on anyway and raised the necessary money. His legacy is still with us today.

His engagement with the art establishment and his energy and enthusiasm for more inclusive and accessible art bore fruit in 1973 when the old establishment dominated Arts Council was disbanded and a new more democratic one was constituted with him as a member. He was able to put into practice his belief that art was for the people and not just for the few. His ascent from outsider to being a member of the new establishment was confirmed in 1978 when he was one of the first group of artists elected into Aosdána. Following the breakup of his marriage in 1980 to the coy Constance he moved to Galway - stepping back from art politics to focus on his work. Anyone interested in Irish art and our cultural history, will find much to admire in this doughty character and much to interest them in this generously illustrated and handsome book.

Posted with Blogsy
Posted by Ardmayle at 3:52 PM