Mariah Garnett - Other an Father 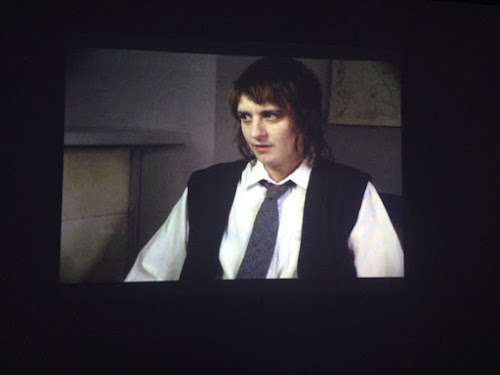 The Metropolitan Arts Centre (MAC) in Belfast encompasses three separate galleries and a risk-taking programme that contrasts with the more conventional Ulster Museum exhibitions. One of its current shows features Mariah Garnett an LA-based film maker often associated with LBGT themes. Garnett's previous subjects included the iconic gay porn star Peter Berlin and the transgender historical figure Catalina de Erauso. Her first solo show outside the USA looks at the circumstances that led to her Protestant father's departure from Belfast during the Troubles because of his relationship with a Catholic girl. Garnett bases her film on the now seemingly innocuous BBC interview her father did back in 1978 that got him into trouble with both communities. The exhibit consists of three films: the original BBC interview, a recreation of the interview where Garnett dresses up as her father (convincingly but for the baggy overcoat) and a transgender actor plays his Catholic girl-friend, and finally a film of Garnett interviewing her father now as they watch the old BBC film. While Freudians may have a fine old time speculating on a woman dressing up as her father and employing a transgender actor to play his girl-friend, the resultant film seems more whimsical than portent-laden.