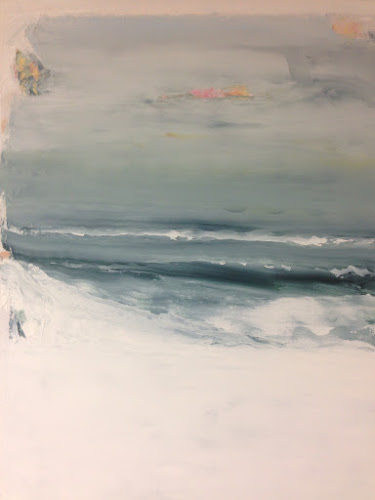 
Source, the title of Eddie Kennedy's new show, invites speculation. It could refer to the sea, the source of all life, that appears in many of the paintings. Or it could refer to North Mayo itself which thanks to the commendable support of the Ballinglen Arts Foundation is becoming to Irish landscape artists what Mont Sainte-Victoire was to Cezanne - a rich source of inspiration. Luminaries such as Hughie O'Donoghue, Donald Teskey, and Pat Harris have recently engaged with its troubled waters, its jagged coastline, and it's haunted past. Kennedy is the latest to be drawn the region. A Tipperary native he has abandoned the placid pastures of the Golden Vale to focus on the seas around Blacksod Bay and the imposing presence of Nephin. The predominant colours are the creamy white of the sea and the blue grey of the sky. These are bedecked with flecks of colour and the occasional bold horizontal of green or black. Kennedy resists the label of landscape painter but rather sees himself as one who experiences the landscape and transmutes this into art. The fruits of his encounter with the wild West are surprisingly tranquil paintings, restful on the eye and soothing to the soul.