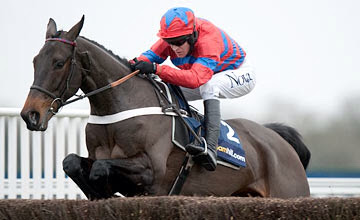 Day 2 Post-mortem: After a distinctly unpromising start with No More Heroes severing a tendon when apparently going well two fences out, things got much better as Day 2 progressed. I had to back Sprinter Sacre (above) at 5-1 and he ended up giving us the biggest story of the Festival so far. He had been written off because of a heart murmur and many felt he should have been retired. Instead he recovered his former prowess and slaughtered the Mullins favourite. Bolger's horses ran disappointingly in the cross country and I was not alone in thinking the sainted Nina Carberry may have given Josies Orders too much to do. Although a mistake a few fences out didn't help. I should have stopped at this stage but decided it was time Paul Nichols had a winner so I backed both his horses in the Fred Winter. Diego Du Cahrmil had smart French form and word from the gallops was positive, as was the decreasing price. Romain De Senam was too long a price for his form so I added him for insurance. They finished first and second after the fortuitous last hurdle fall of two Irish challengers. That result ensured that this year I'll finish ahead no matter what happens over the next two days.


Day 3: But the show goes on. Nobody gets rich betting in Novice Chases so I'll put Garde La Victoire in my Yankee but otherwise will avoid the JLT at 13.30. The Pertemps Final at 2.10 is a puzzle so I'll chance Leave at Dawn because of Charles Byrne's hit rate when he travels from Ireland for big handicaps. I like Henderson's Broxbourne e.w. In this race as well. The Ryanair Chase is supposedly at the mercy of Vautour but I never bet odds on and so will look to another Irish horse Road to Riches for e.w. value. I've always been a fan of Mouse Morris at Cheltenham right back to Trapper John many years ago. He seems to have a knack with long-distance hurdlers so I'll have a bet on Alpha Des Obeaux in the World Hurdle. The last three races I may nibble at as the day unfolds but nothing jumps out at me except perhaps that John's Spirit is reasonably handicapped in the 4.10.