Bill Griffin - the Oilman of Allihies 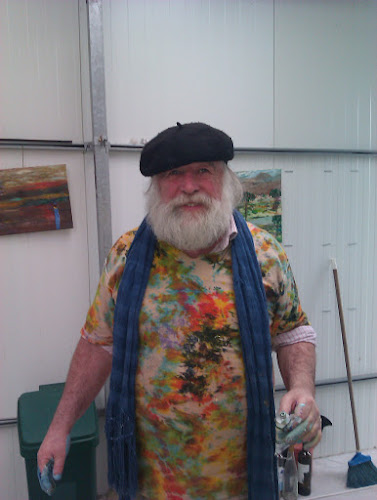 The North Mon in Cork in the late Fifties was a fine breeding ground for hurlers but not for artists. Its robust and philistine regime did not encourage such airy notions. The young Bill Griffin had an aptitude for art but little outlet for his fledgling talents. When Griffin tried his hand at a few nude studies via two compliant cousins ("who were into art") his efforts were uncovered by a Brother correcting an English essay. Physical retribution followed as the skill of the drawing did not compensate for the flagrant inappropriateness of the subject matter.

Griffin grew up in Blarney Street in comfortable circumstances. His father was a dental mechanic with literary leanings who enjoyed an occasional pint with Frank O'Connor in Phil Moynihan's bar in Sunday's Well. His earliest encounter with art was seeing his father make little models from spare plaster. Like many artists he is mildly dyslexic and left school at 14 : "there's not a word in the English language I don't know how to spell a dozen different ways." Over the next few years he took a series of short-lived jobs while trying his hand at drawing and painting. He began mixing with real-live Cork artists such as Willie Harrington, John Burke and Maurice Desmond in Kealy's (a long-gone bohemian bar close to the old Examiner office). He showed one of his sketches ("a little drawing I was proud of") to the famously irascible Burke (then teaching in the Crawford College of Art). Burke tore the sketch into pieces in front of him saying: "don't give up the day job". Griffin didn't actually have a day job, having been sacked recently by Ford's, but discouraged he headed for London. Cork lads of his generation knew the route well: the Innisfallen to Fishguard and the train to Paddington.

His art aspirations caught up with him again in London. He was arrested for smoking marijuana and was incarcerated briefly in the cells of Marylebone Police station. There he bumped into Henrietta Moraes, muse and model to Lucien Freud and Francis Bacon, and later girl-friend of Maggie Hambling. She was in for burglary. They had a brief affair, or as Griffin puts it "I banged a tune out of her". She introduced him to the Colony Club and to Bacon and his set. Bacon sneered at his paint-splattered shoes telling him "you don't have to have paint on your shoes to be an artist". Griffin's ready wit didn't let him down as he responded "it does if it's your only pair." He found Bacon unfriendly but became particularly close to George Dyer, Bacon's ill-fated boyfriend. Dyer was a snappy dresser and he passed on clothes to the impecunious Griffin. "When I came home to Cork I was wearing Dyer's suit with a yellow shirt and pink tie". But life in London was hard, a spartan studio in Ladbroke Grove proved too expensive and survival became moot. He headed up to Yarmouth to work in the burgeoning off-shore oil drilling business. Art was pushed into the background as he found he had an aptitude for rig work: "I loved the physicality of it and I understood the technology better than the Yanks."

Oil exploration began off Kinsale in the early Seventies and Marathon Petroleum was looking for labour locally. Griffin was a step ahead of the posse. The legendary tool pusher Gerry Gunther hired him as a roughneck, based on his brief Yarmouth experience.The oil business, like the IT business today, is a true meritocracy and if you're good you'll thrive. Griffin quickly moved from roughneck to derrickman, from derrickman to assistant driller, and then to driller. He developed a particular expertise in directional drilling, whereby the suppleness of the drill string is exploited to enable you to drill almost horizontally as well as vertically. This arcane skill took him all over the world - initially working for American companies but eventually he bought two oil rigs and worked for himself. A downturn in oil prices killed off this business and he quickly discarded his overalls and donned a business suit - travelling the world as an oil consultant. He ended up in Iraq working with the Irish company Bula Resources on the Oil for Food scheme.

On his 50th birthday he decided to quit. In Iraq he had witnessed at first hand the corruption involved in the oil business and the suffering and death that resulted amongst the ordinary people. "I suddenly saw the kind of industry I was in and I didn't like it." He resolved to return to Cork and have a go at the art thing.

His old Kealy's friends Harrington and Desmond were supportive. "Willie (Harrington) was by far the most sympathetic" and "Maurice (Desmond) helped me sell paintings." He took no art classes but just rolled up his sleeves and started painting. He literally rolled up his sleeves because after some initial dabbling with paintbrushes he decided he would paint exclusively with his fingers - "ten digits yearning for expression". It's not a technique that's common in the art world. "It just became easier for me" he explains, "I can use ten different colours at the same time if I feel like it". His first break was in a group show in Saint Fin Barre's Cathedral - where the Dean Michael Jackson (now C.I. Archbishop of Dublin) became an early supporter. He was spotted there by John P. Quinlan of the Vangard Gallery. Quinlan gave Griffin his first opportunity by offering him a one man show. Quinlan explains: "I did so because I liked his story and wanted to give him a break". Griffin remains grateful: "to this day I appreciate what John did for me".

He then made a fortuitous trip to Allihies. His brother has a large house there and he came down to paint for a week. That was nine years ago and he's still there. He met a local teacher, Deirdre Ni Dhonnchadha, and they both liked what they saw. "I think I landed on my feet" he says with a smile. She's also "a virtuoso tin whistle player" he informs me proudly. Ni Dhonnchadha is the niece of the legendary fiddle player Denis Murphy, Sliabh Luachra royalty.

Griffin is burly, he's bearded, he's bushy-haired, he's wildly unkempt, and he's extravagant in word and gesture. What characterises him most is his unwavering good humour and his infectious enthusiasm for life in general and the arts in particular. His role in Allihies is far more than that of another artist plying his trade. He seems to function as a kind pf power station for the arts in the parish. He organises the annual pantomime, he writes and performs one man plays (which he tours abroad), he organises exhibitions for himself and other artists in the Copper Mine Museum Gallery and he generally adds to the gaiety of nations. At present he is involved with Ni Dhonnchadha in running the annual Michael Dwyer Festival in honour of the renowned tin whistle player who lived locally.

Coming to art by an unconventional route and not caring a lot about the niceties of technique and compositional decorum, Griffin is often described as an outsider artist - or even by some as a naive artist in the manner of the Tory Island school. While Griffin doesn't quite bridle at this suggestion, he is quick to dismiss it. "I think my work is very sophisticated". He featured in Gemma Tipton's exhibition of outsider art in the Crawford a few years ago. "It was me she picked as her anchor tenant". He is not short of venues for his work and when he's not showing at his local Copper Mine Gallery has shown at the Triskel, the Vangard, and the Crawford in Cork, and at the Wexford Opera Festival. He sells well, his current show sold 13 pieces on the opening night. He bats aside all attempts at interpretation of his painting. He sees these ostensibly representational works as pure colour exercises. "In essence if you turn them upside down they will work as abstract paintings"."It's all about getting colour on the canvas". I point out similarities to the work of James Ensor but he says he's never heard of him.

For his current show Griffin tells me that he is "using the whole village as a gallery". The 60 odd paintings are on display at the Copper Mine Gallery, O'Neill's pub up the road, and a disused schoolhouse nearby. Wild and scenic Allihies is worth a visit at any time of the year but if you get down there in the next few weeks you will have the added pleasure of entering the colourful world of the Oil Man of Allihies.

The Copper Mine Museum Gallery

Posted with Blogsy
Posted by Ardmayle at 9:11 AM