The End of the Modern World by Anthony Cronin 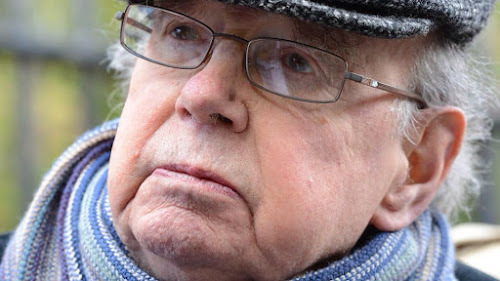 A slightly edited version of this review appeared in the Sunday Times Culture magazine on the 17 July 2016.

When the dust settles on Anthony Cronin's career I suspect that he will be remembered chiefly for Dead as Doornails, his classic memoir of Dublin literary bohemia of the Fifties and for his highly-readable biography Samuel Beckett: The Last Modernist. Despite a substantial output, his reputation as a poet doesn't seem to have acquired the heft of near contemporaries such as Heaney, Longley, Mahon or Kinsella. He is best known for RMS Titanic, his poem "about the death of an old school morality or decency.” In 1986 Thomas Kinsella omitted him from his capacious New Oxford Book of Irish Verse. A very pointed snub. It has been suggested that he went to London at a crucial stage in his career and thus fell out of favour with our parochial literary establishment. Or perhaps his versatility as a man of letters is looked askance at in a specialist area.

The End of the Modern World is ambitious in its scope. It is no less than a sustained elegy for the decline of the west. The poem is an expanded and amended version of a collection of sonnets first published in 1989. It now contains 179 sonnets - 18 more than the original, and some of the earlier sonnets have been amended. Cronin is not for the numbers that Petrarch flowed in, he aims at reason not rhyme and his sinewy iambs often feel more like declamatory prose than poetry. He describes his work as a "psychic history of western civilisation". The tone is sombre throughout and it concludes with the empty triumph of materialism and intimations of the essential meaninglessness of life. We are far removed from the romantic myth of Adam and Eve and a Paradise Lost:

The sun, a crucible of nuclear rage,

Knows nothing of such ends, it thrummed out rays

Of heat until the ooze transformed itself.

The nearest comparison is to T.S. Eliot's The Wasteland. In addition to their eloquent pessimism, both are replete with borrowings from literature, both lament the death of romantic love and they both occasionally let the poet intrude into his poem ("I must keep my iambic beat").

The key to understanding Cronin's poem is Browning's Childe Roland to the Dark Tower came. This poem also inspired Stephen King's highly lucrative Dark Tower series of book - an irony that Cronin I'm sure appreciates as his poem laments the triumph of brute capitalism. There are specific references to Roland and the Dark Tower within the poem, and many oblique ones. The final sonnet paints a picture of Manhattan and its skyscrapers, those symbols of materialism, that give the Dark Tower its contemporary shape:

Money's convulsions too are life-giving,

Neutral, imply no purpose in our hearts,

But blazed upon this rock to make Manhattan

Rise in resplendence, such a culmination

Just as Childe Roland involves a journey and a quest, Cronin's poem is a trip through Western civilisation going back to Roman Times, beginning with the invention of the plough:

Until the mould-board plough dragged through the mud

From there we are taken on a ride through feudal society, the cult of courtly love and the growth of the great manors, and the French Revolution. Ireland gets a look in via the Famine:

The horror of their hunger, so reflected

Even by burnished mirrors of rich corn

Was what they fled from in dumb multitudes.

Literary figures emerge regularly. Section two Of the sequence opens with a meditation on Milton, and Baudelaire and Byron also appear. Cronin is much possessed by sexual matters and he grimly records the transition from the brutal to the business-like with just a little courtliness in between.

The range of allusion to historical events is very broad, and abrupt changes occur with little transition - like Pound's Cantos. Mussolini "hung by the heels", scenes from Auschwitz, Robert Kennedy's funeral, Gaughin in Tahiti, De Sade's sexual prowess, Elvis's penchant for white panties all form part of his journey.

Sonnets 152 to 155 are all new and it's not difficult to see in them Cronin's ambiguity about his own role within the dark tower as Haughey's arts commissar:

A padded door, to lunch with Evil in

An inner sanctum. And of course he loved it,

While Cronin may have supped with the devil, his poem also contains many references to the hardship he endured by abandoning the Bar for a literary career:

The admonition from the EBS

Which threatened to uproot me every month,

The ESB which threatened instant darkness

This has a topical feel to these lines. His tireless advocacy for state subsidies for artists is based on bitter experience. But his concluding sonnets suggest a despair at the impotence of the arts in the face of the all enveloping power of capitalism:

A passionless acceptance reigns within

These air-conditioned spaces which absorb

To the faint murmur of a distant duct

The last assault waves of the avant garde

Posted with Blogsy
Posted by Ardmayle at 1:32 PM