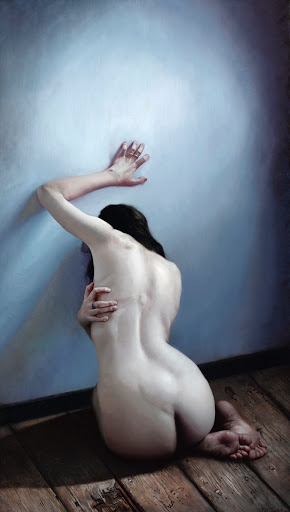 The Royal Ulster Academy's annual exhibition is usually a good opportunity to enjoy a panoramic view what's happening in the art scene north of the border and to spot some emerging talent. This year however the exhibition has a broader scope with a large number of selected artists and invited artists coming from south of the border. Conversely a number of the North's more established figures, and RUA members, are missing. Without running a fine comb through the exhibitors I notice that there's no Colin Davidson or Paul Seawright. Given the dearth of open submission shows in this country it's good to see the RUA casting its net so wide, with artists such as Karen Hendy from West Cork and Gavin Lavelle from Galway joining the many Dublin-based contributors.

There's a sombre side to the show. The  attractive and informative catalogue contains obituaries of seven members of the Academy who have died in the past 12 months. In addition to these texts, each of the deceased is remembered via two works in the exhibition. The best-known amongst them is Basil Blackshaw. He is represented by a fine portrait of his old friend the late T.P. Flanagan and by the very aptly chosen Big Brown Dog. Blackshaw was an animal lover and dog owner all his life and far preferred talking about his dogs than his art. In an interview a few years ago he was more animated about a champion greyhound he once owned than about any of his major paintings.The Irish art world is diminished by his passing.

A feature of the exhibition is the large number of portraits, portrait busts, and generally figurative work on view. Poets and artists inspire a number of these. There's a bronze bust of a young Seamus Heaney and a ruddy and romanticised painting of Michael Longley holding a wren in one hand, some flowers in the other, and looking a tad embarrassed about it all. There's a very fine ceramic bust of Austin Clarke by Bob Sloan and nearby you can find his namesake the 1916 leader Thomas Clarke. Robert Ballagh has an austere painting of Brian O'Doherty (the erstwhile Patrick Ireland), a fellow artist who shares his interest in Irish politics. Hector McDonnell shows Neil Shawcross on a suitably red armchair amidst the contents of his studio. There's plenty of quirky and characterful portraits as well. Michael Connolly's Intern is a memorable study in gormlessness, Paul Bell's Wolf has a stolid menace, and Emily Scott's Filippa exudes character and elegance. There are so many good portraits it seems invidious not to name more. There's David McDowell's skilful pencil drawing Remember Me and Jackie Edward's burnished old man in The Heart That Asks. A few of the artists introduce a little light eroticism into the mix, these include Carol Graham's Iconic Allure of Light, and Kyle Barnes' Fixation.

Of the many works relating to the human face or figure Francis O'Toole's One for Sorrow (above) stands out. This splendid, glowing, sinuous and troublingly ambiguous nude verily steals the show. O'Toole's meticulous painting devotes as much care and loving attention to the knots on the wooden floor as to the dimples on the subject's back.   Sculpture is very well served both in terms of quality and quantity. This seems to have been the result of a deliberate policy as most of the invited artists are well-known sculptors. As you walk into the gallery the first piece you encounter is Furrow by Eilis O'Connell, a small bronze that demonstrates those characteristic O'Connell qualities of perfect harmony and subtle suggestiveness. Further into the first gallery there's the powerful Woodquay Bull by John Behan and the playful The Visitor - a rampant bronze grasshopper by Deborah Brown that won the Mullan Gallery Award for best sculpture.The flag of abstraction is flown by Michael Warren with  Kireji, a blackened bronze slab with fissures, Stephen Deery's Deliverence, and Corban Walker with an intricate maze-like creation. Ann Butler's surreal white porcelain sewing machine and Peter Meanley's playful stoneware The Fisherman also catch the eye.

There's plenty of paintings of the highest quality - these include The Garden Shed, an accomplished and painterly work by Clement McAleer, Breaking Wave, a fine brooding seascape by James Allen, Long Duree by Jennifer Trouton which won the Tyrone Guthrie Residency Award, Cormac O'Leary's Inisheer II, and Mick O'Dea's dramatic tour-de-force Study for the Burning of the RHA. There are two large lively works by Diarmuid Delargy and an uncharacteristically abstract piece by Neil Shawcross - the title Jazz is the clue to this freeform exercise. Our quiet woodlands are given their due by Keith Wilson with Being Here and Michael Wann's Woodland Shadow - the latter in charcoal, a medium not for the faint-hearted.

Photography is not very well represented with less than a dozen works on show. Rory Moore's Brig Mary Jane, Westport-Baltimore 1847 is an evocation of the Great Famine. It shows a ruined and abandoned cottage against a brooding western sky. Aidan Crawley adds a further sombre note with Missing I - a study of the Somme landscape. In viewing a show with 329 exhibits it's hard to do justice to the eight video offerings which require more time to absorb than viewers usually have. Many of them can be sourced online for more leisurely perusal. Oona Doherty's Hard to be Soft featured the artist showing admirable litheness as she performed her expressive dance.

Print does somewhat better than photography in terms of numbers. March is an accomplished lithograph by Elizabeth Magill, Margaret Mannion Kallen won the Nicholson Bass Printmaking Prize for Not a Walk in the Park, an etching and carborundum print, and Crona Gallagher produced a couple of charming copperplate etchings .

There's plenty of fun to be had in this is an entertaining and eclectic show. You don't have to be a dog lover to enjoy Caroline Fellowes Obedience IV (a dog on a chair in a flood) which manages to be both surreal and poignant at the same time. And you'll surely smile at Stephen Johnston's photo-realist Cake in a Jar which earned him the KPMG Young Artist Award. The selection committee have done a good job in purging the show of the worthy landscapes and other stodgy fare that often dominate academy exhibitions.

Edited with BlogPad Pro
Posted by Ardmayle at 5:48 PM