John Behan - Past and Present 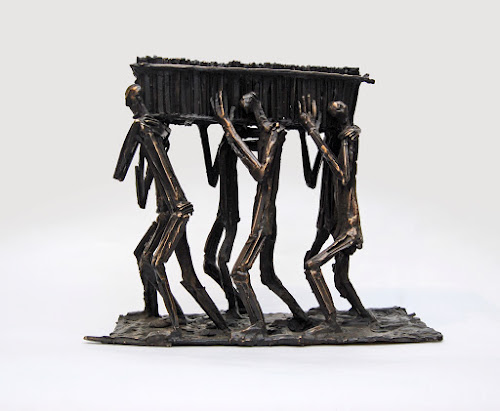 This piece first appeared in the Sunday Times Culture magazine on 23 October 2016.


John Behan's fruitful and politically-engaged career started in 1960 when a bronze bull of his was accepted by the Irish Exhibition of Living Art. The cover of the catalogue for his latest exhibition features the Bull of Easter, showing that he is still mining that mythic source for his muscular and expressive sculptures. But there's lots more on offer in this rich and varied show that revisits old themes and explores new ones. The bronzes are accompanied by a series of acrylic drawings that served as preliminary studies. Lovers of W. B. Yeats are well catered for with a number of the pieces inspired by the poet. These include: Easter 1916, Horseman Pass By, Wild Swans at Coole, and even a spectral figure that evokes those famous lines "the ghost of Roger Casement is beating on the door". The most eye-catching work is his dramatic Death of Cuchulainn, with its ominous raven perched above the slain hero. There's a lot of death about, if you include his coffin ships and chunky war chariots. Death of a Dramatist - his homage to Brian Friel - shows a meticulously detailed wicker coffin being borne to the grave, the knees of those carrying it bent under their illustrious burden.