A Mild Moan about The Siege of Jadotville 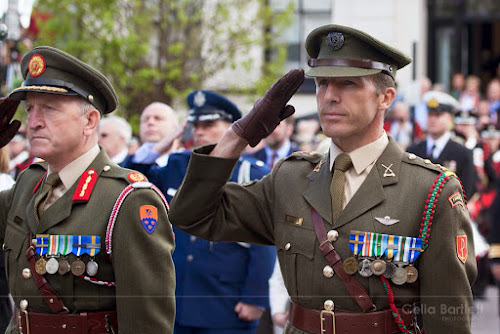 I watched this on Netflix last night and found it deeply unconvincing. I have no doubt about the historical heroics of A Company and about how badly they were treated by politicians and by their own senior staff. My reservations were mostly about tone, about historical accuracy and about the actual battle. In the opening scenes the soldiers' uniforms were the wrong shade of green - perhaps they took poetic license for aesthetic or cinematographic reasons. I also had a major issue with Commandant Quinlan's saluting technique. I grew up on a series of military barracks (including the Curragh and Collins Barracks, Cork) and never saw an Irish officer use that horizontal style - it was always more a diagonal (see image above). Back in those days also the hierarchies were very strictly observed and there would be no casual banter between ranks - nor would a junior officer speak to a senior one in the manner they did in the film. I don't know where they got that scene at the end where Quinlan strikes the general - that would have provoked a major scandal and a certain end to his career. The portrayal of Conor Cruise O'Brien was also unconvincing. He was far from the cynical and worldly careerist portrayed and in fact suffered from his idealism throughout his working life. But the most unconvincing aspect was probably the depiction of the battle. If they had been overwhelmed and outnumbered in the fashion depicted, how come there was not a single fatality. There were bullets flying everywhere and not a single one had a fatal outcome on the Irish side - despite the hundreds that perished amongst the rebels and mercenaries. It must have happened differently - unless that mass they went to earned them a miracle. I'd give it two out of five. But I'm not a fan of action movies so maybe I'm biased.

Posted with Blogsy
Posted by Ardmayle at 3:01 PM