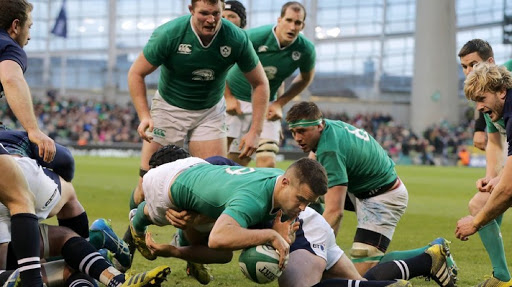 At first glance today's programme of matches looks straightforward. England will beat France comfortably, Wales will dispatch Italy with ease and a Joe Schmidt powered Ireland will beat Scotland narrowly. The bookies agree so a straightforward bet won't yield much. So we must look at the handicap odds for value. Even giving France a 13 point start England look worth a bet. But can Wales give a Conor O'Shea guided Italy a 12 points start in a wet Rome (rain forecast)? I wouldn't bank on it. Can Ireland give Scotland 5 points in a similarly wet Edinburgh? That's a hard call. Of course now that there are bonus points available we should expect more tries so maybe that consideration will cancel out the limiting weather considerations. Hmmm.

Regarding our team, I wouldn't overstate the cost of Sexton's absence. Jackson is a lesser player but a more reliable place kicker and at least we won't have the disruption of Sexton's inevitable early withdrawal. We may be underpowered in the lineout though with both Donnacha Ryan and Peter O'Mahoney absent. There's a huge onus on Toner and little obvious back up - Henderson and Heaslip will have to stretch. Overall it's a strong team but God help us all if Murray gets injured - and the Scots have form when it comes to targeting him.

I think the Wales Italy match is the most interesting of the three. What will O'Shea come up with?  The Welsh pack don't seem that strong so maybe he'll surprise us and revert to a 10-man game. Or will he will continue the gay cavalier approach that he was known for at Harlequins.
Posted by Ardmayle at 12:20 PM