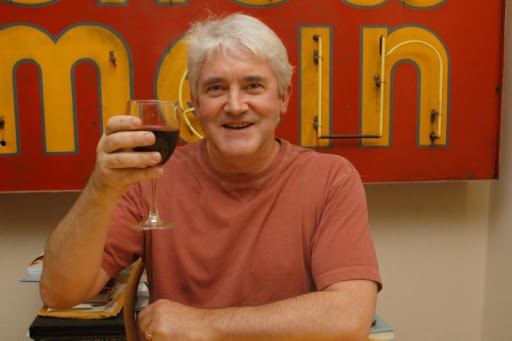 The first time I met John O’Mahony was in the autumn of 1970. I was sitting at a table in the Rest in UCC surrounded by my cronies. I was in Second Year and an established figure amongst the arty set, being involved in both the Dramat (the studen drama society) and  Aire, the student magazine. I had also been selected for the UCC tennis team that year. A made man in our little world. Our table was approached by this slightly agricultural figure in a black duffle-coat with a shock of dark dishevelled hair and a ruddy complexion.  I had never seen him before. “Are you Johnny Sullivan?” he asked me directly. “I am” I conceded, wondering what does uncouth fellow could want of me. “Didn’t you do English and Philosophy last year?” he continued. I agreed that was so. “Can I have your first year notes?”  the young pup had  the temerity to ask. I was so taken aback at the brazenness that I meekly agreed and arranged to meet up with him the next day.

Thus began my relationship with John O’Mahony who died full of life earlier this year in New York. That opening encounter captured one of John’s abiding characteristics – the ability not to pussy foot about but go directly for  what he wanted. This had its down sides of course, especially where women were concerned, but it took him to many places a politer person would not have reached. In Cork, that most acidulous town, he quickly came to be called The Candidate – after the 1970 film of the same name about an upwardly mobile politician. To this day old acquaintances from Cork refer to him thus.

He too got involved in the arts scene in UCC and we frequently coincided at theatrical events and the associated social occasions. We both liked drinking and carousing. He managed to alienate himself from the affections of many of his peers at UCC when he decided to piss in the corner of a mutual friend’s living room during a party. It wasn’t so much the pissing she resented as the fact that he splashed a couple of other attendees sitting nearby. Occasionally we may even have had a girl-friend or two in common but we studiously avoided getting into any discussions about that. We were always friends but never very close friends. I knew little about his background except that he was an only child from Bantry and that his mother had died when he was in his early teens.

Our last UCC involvement came when we both happened to do the Higher Diploma in Education a few years after graduating. We decided that it would be wise to go after an honours diploma with the associated salary boost it gave teachers. To this end we collaborated in studying separate sections of the course and exchanging notes. It worked well and we both got honours but alas neither of us ever made use of this qualification. After UCC we drifted apart. I was on my travels with the oil-rigs and he was working as an arts officer mostly around Cork.

After I became tired of risking my life on  drilling platforms  I ran for cover with a software company in Dublin which was looking for technical English teachers to give introduction to computers classes for students from Sweden and Saudi Arabia. It was 1979 and It provided a timely introduction for me into the world of IT.  I flourished there for five years or so. John was going through a period of unemployment and I managed to fix him up with a job there as well. However, it only lasted a few months. We had an office close to Pearse Street Garda Station and would frequently head over to Bowe’s for a pint or two after work. And occasionally during work. John did like a pint in those days and one lunch time he drank not wisely but too well. His afternoon class of Saudi students took umbrage at the state of him (each class had an official representative) and complained to our manager – a woman with a highly-defined commercial streak. Notwithstanding the fact that it was a week before Christmas he was sacked on the spot. No ASTI for him – not even a second chance.

We went our separate ways for a number of years then. I was working abroad while John remained in Dublin where he had some loose association with the Windmill Lane Studios. There was an infamous incident around that time that may have hastened his ultimate departure to the USA. He managed to engineer his girl-friend at the time into a secretarial position at Windmill Lane. She was a pretty girl with a roving eye. This roving eye landed on a singer called Terence Trent D’Arby – a bit of a star at the time and a singularly good-looking lad. She ditched John and took up with the glamorous Terence. John was incensed by this ingratitude and on encountering her in a Dublin night-club he gave her a slap. He was very drunk at the time but this unforgivable behaviour burnt all bridges to the local arts and music scene. So our bould hero hied himself off to New York.

He started life with the Irish Echo in New York but soon graduated (if that’s the word) to  the New York Post where he thrived. I visited New York a lot I those days and we’d hook up. His journalist credentials got us into places like the Soho Tavern and other fashionable spots. However he preferred the sleazier side of town. Billy’s Topless, Hogs and Heifer’s and that fine old Bowery bar Milano’s were our favourite haunts. John was always a bit erratic when he drank – especially when he started on the shots. A contrary, insinuating side could emerge. I remember the waitresses in Hogs and Heifers having him kicked out for excessive lip one night. He also committed the awful social solecism of hitting on one of the strippers in Billy’s Topless. Having plied her with dollar bills during her act he followed her over to the bar during the break and tried to get her to go on a date with him. The woman, a professional rebuffer was having none of it but discouraged him gently. God loves a trier.

Then out of the blue he married an extraordinarily fat girl who was a colleague on the New York Post. This eventually turned out not to have been a good move. However there was a fine wedding in New York culminating in a pipe band from the NYPD escorting them down 5th Avenue. His wife was from California and after an abortive pub venture in upstate New York they headed west to Venice, CA – where they bought property a few minutes from Venice Beach. Things rested so for a number of years. The fat girl slimmed down and set about getting tattoos all over her new body. John was now working for the Bloomberg organisation and getting along fine. A few years ago it all fell apart. The wife fell in love with her tattoo artist and left him – there was some nasty financial fallout  from all this but over time they seem to have arrived at an amiable settlement. John however was never really a Californian so he headed back tout suit to his beloved New York – where he still had his nice rent-controlled apartment.

Over the years he had health problems. He underwent a major heart bypass operation in the mid-80s. This left with a long scar from neck to navel but otherwise he recovered well and was soon back carousing. Then two years ago he called me for advice about the prostate cancer he had just been diagnosed with. A friend of mine and my brother-in-law had both been similarly afflicted but had come through the operation and resumed their lives in reasonable nick. I hooked him up with both of them and this gave him the data on which to make a decision. Prostate operations frequently offer you the Hobson’s choice of compromised waterworks or compromised erectile function. Being John, he took himself off to Thailand for a month to indulge his carnal side before his ability to do so was impaired. He returned from Thailand and had the operation which was reasonable successful.

We communicated regularly over Skype for the past few years and we had dinner in Dublin twice in 2016, and went to see Juno and the Paycock. He also sent me a script he'd written for a super hero saga he hoped to have accepted for a pilot TV show. It's not my genre but it seemed pretty good to me and I sent him back some positive comments. My last contact with him was in early December 2016 when he had returned from a very lively holiday in Mexico. He included a YouTube link to demonstrate the carousing he had indulged in down there. Early in the New Year he had a fatal heart attack during a morning yoga class in New York and died surrounded by a crowd of sympathetic women in leotards. A somehow fitting end.
Posted by Ardmayle at 2:40 PM