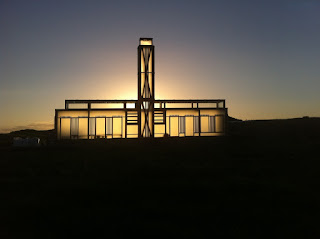 There’s a veritable feast of Famine-related art on view in Skibbereen and its environs over the next two months. The corner-stone event, Coming Home: Art and the Great Hunger, features an exhibition at the Uilinn gallery in Skibbereen, opening on 19 July. It consists of 50 paintings from the collection of Ireland’s Great Hunger Museum at Quinnipiac University, Connecticut. It was shown in Dublin Castle earlier this year but its title takes on a more literal hue now that it reaches West Cork. Its curator Niamh O’Sullivan described the Great Famine “as the migration crisis of the 19th Century” and anyone viewing this exhibition and the associated shows will be struck by the contemporary resonances – not least the plight of 20th Century migrants on Lesbos and Lampedusa. On the days following the opening of this exhibition, a number of site-specific events will also take place in the surrounding area under the auspices of Ann Davoren and her team at Uilinn.

Skibbereen has long been regarded as the epicentre of the Great Irish Famine. In a travel journal written in 1847, Lord Dufferin referred to Skibbereen in the County of Cork as “the very nucleus of famine and disease”. It’s fitting then that the town should host activities that recover, record, and remind us of this shameful episode in our colonial history. A period where greedy landlords, entrenched racism and laissez-faire economics conspired to inflict a devastating famine on a country with plentiful alternative food sources.  It’s the time of the year when West Cork is busy with tourists, very many of them English, and these shows should help broadcast more widely a part of our history that many are still uncomfortable with at home and ignorant of abroad.

The Irish Famine had very little in the way of contemporary visual records or associated art. There were gross caricatures in Punch magazine (depicting Paddy’s plight as caused by his own brutish stupidity) and the sanitized drawings of Jerome Mahony in the Illustrated London News – which at least elicited empathy from a largely indifferent British public. The only contemporaneous art to depict the disaster was Daniel Macdonald’s romanticized work. Irish Peasant Children shows a chubby-cheeked trio, well clothed and seemingly carefree. Only a darkening sky in the background suggests trouble ahead. Aside from Macdonald and some of Mahony’s drawings most of the pertinent art in the Uilinn show comes from the latter half of the  20th Century and later. Two of the most persistent and effective chroniclers of the Famine are sculptors John Behan and Rowan Gillespie. Behan’s Famine Mother and Children is based on a well-known Jerome Mahony drawing called Bridget O’Donnell and Children – but Behan’s sculpture has the poignant heft of art that’s lacking in Mahony’s illustration. The most immediately impactful image on view is Lillian Lucy Davidson’s Gorta. It shows a gaunt and desperate trio burying a child in unconsecrated ground. Other striking and evocative works are Hughie O’Donoghue’s On Our Knees and William Crozier’s Rainbow’s End. O’Donoghue’s mother came from the Erris area of North Mayo, a place as devastated as West Cork was by the Famine. The artist has regularly turned to that area for inspiration and recently built a house and studio there.

Three of the associated art events are site specific and so carry with them the haunting relevance of their locales. Out past Reen Pier, near Union Hall, a narrow road leads to a large isolated property belonging to the artist John Kelly. Kelly was born in England but the family went to Australia when he was six months old. He has a Cork connection through his father who was born near Mallow. Kelly is best known internationally for his Cow up a Tree sculpture (a version of which sits on his land overlooking the sea, to the bemusement of passing sailors) but also paints and makes prints to service galleries in Melbourne, London, Cork and Dublin. Kelly has fabricated a scale model of the Tate Modern amidst the sculpted wonders that abound on his property. The Tate family’s fortunes were built initially on a green-grocery business in Liverpool. During the Famine their shops received the regular supplies of fruit and vegetable from Ireland necessary to sustain its business. A tour of the Reen Farm Sculpture Garden on the 26 July will include a reading by Jeremy Irons of the famous N. M. Cummins letter to the Duke of Wellington. The letter describes in harrowing detail what happened in the area round where Kelly has located his Tate model: “In the first six (hovels) famished and ghastly skeletons, to all appearance dead, were huddled in a corner on some filthy straw, their sole covering what seemed a ragged horse-cloth, naked above the knees. I approached in horror, and found by a low moaning they were alive, they were in fever - four children, a woman, and at what had once been a man.”

Another event that points directly to local experience around Skibbereen is Toma McCullim’s 110 Skibbereen Girls project. In 1850, 110 girls were plucked from the workhouse in Skibbereen and sent to Adelaide and Melbourne in Australia, ostensibly for domestic work. However, as there were nine men to every woman in the colony at this time, their primary role was as breeders. The project was referred to as the Earl Grey scheme after the Colonial Secretary of the time. McCullim who works as an art therapist in the Community Hospital, on the site of the old workhouse, came up with the idea of involving staff and residents in developing a permanent site specific artwork to mark this moment in history. She sees the girls removal from the workhouse as a positive thing “we can’t imagine the horrors they were leaving. It’s a story about courage and having a belief in the future.” Before their voyage each girl was given clothes, a bowl and a spoon. The significance of a spoon as a metaphor in the context of the Famine is obvious.The current hospital cares for the elderly. Staff and patients were given beeswax and asked to fashion individual spoons which would later be cast in bronze. These will be embedded in the original workhouse wall (an artwork in itself) just inside the entrance to the hospital. Viewers can stand on on a block of Australian sandstone, sourced and donated by the Australian Embassy to view this surreal and poignant piece. There are 10,000 Australian citizens directly descended from these girls and some of them will attend the official unveiling of this sculpture on the 20th July. These include Judith Constable who is a descendant of Jane Leary, one of the 110. Thereafter it will be on permanent display in the grounds of the community hospital.

The overgrown remnants  of the old workhouse in Schull will feature an intriguing multi-media event entitled Anáil na Beatha (breath of life) on 21 July. It has been created by Alanna O’Kelly, a multi-media artist with an international reputation. At 9.30 pm on that evening the audience will be guided in what O’Kelly describes as a “slightly processional way” through a landscape containing story tellers, contemporary videos featuring fleeing migrants and refugees, performance artists using black butter (a nod to the old butter road nearby), a local choir, and Cormac Begley breathing the concertina (no I don’t know either). The procession will culminate in a gathering around the Famine grave outside the walls of the workhouse. O’Kelly thinks of the workhouse as “a sacred site” and her aim “is bringing people there and giving them something to think about”.

Other events planned include schools programmes, lectures, walking tours, concerts and theatre. The Skibbereen Heritage Centre, under its energetic and innovative director Terri Kearney, provides an excellent permanent exhibition of the Famine story and will conduct guided tours of Famine sites during August. It will also unveil some new Famine information panels on the walls of the hulking old soup kitchen building near the Centre.