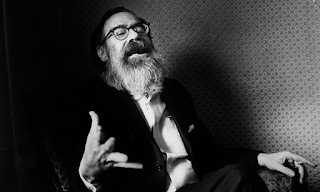 It’s hardly surprising that a man who spent most of his working life in academe should get snippy with those who speak disparagingly of “ivory towers”. In his new collection of essays on modern Irish writing, Gerald Dawe describes the term as “a silly patronising phrase for intellectual and imaginative effort”. While a light whiff of the academy may occasionally emanate from these essays, they are free, mercifully, of the prolixity and gratuitous esotericism that have been known to emerge from that source. We get both insight and entertainment. The opening essay outlines the very direct influence of  Yeats’ later poetry on Beckett and also describes the only meeting between the two in Killiney where Beckett “was disgusted with the way W. B. Yeats simpered over his wife”. Dawe is a poet so we expect and get fluent phrase making. In his essay on the tragic John Berryman (above) and his generation blighted and buried by drink, drugs and depression Dawe comments laconically: “by the 1990s poetry was viewed much more as a career than as a complex fate”.

The title of the book, The Wrong Country, is taken from Hugo Hamilton’s memoir The Speckled People. Hamilton counsels writers not to be afraid of saying the opposite to received wisdom even if everyone  “thinks you’re in the wrong country, speaking the wrong language.” This supplies a loose organising principle for the essays some of which feature Irish writers whose early works were banned and neglected for mocking conventional wisdom and mores. The fascinating and underrated Northern poet John Hewitt is much admired by Dawe. We read of an encounter between Hewitt and Sean McBride in 1948 at Yeats’ reinterment in Drumcliffe. Hewitt tells McBride that the North won’t countenance any federation with the South until the Irish government tackle “censorship, divorce, birth control and the place of organised religion”. What would the old socialist think of us now we wonder.

Ireland in the 1950s was a miserable place. Money was tight, and censorship was tighter, emigration was rife due to “the failure of De Valera’s nationalism”. It seemed that fun was forbidden and and the Church ruled the land. But along came J. P. Donleavy with the Ginger Man and Brendan Behan with Borstal Boy and the Quare Fella to point us towards a more unbuttoned (literally in a famous scene in the Ginger Man) and carefree world where cakes and ale were consumed with abandon. This period also featured Patrick Kavanagh’s break through collection Come Dance with Kitty Stobling that expressed attitudes questioning the Church’s writ. Dawe is clearly a fan of the man from Mucker and it’s good to see his masterpiece The Great Hunger get a well-deserved pat on the back:  “one of the mid-century Irish classics.”. The hunger referred to in this poem is of course not the Famine but the sexless lives of Maguire and his fellow farmers in rural Ireland.

Professor Dawe’s previous publication (The Cambridge Companion to Irish Poets) aroused the ire of those who police gender quotas. There can be no such quibble here.  Female writers are very well represented. He’s an enthusiastic champion of Dorothy Molloy, the Ballina poet and painter, who died prematurely in 2004. He highlights the work of lesser-known writers such as Michelle O’Sullivan and Leontia Flynn, and does not neglect the estimable Eavan Boland and his fellow emeritus professor of English at Trinity, Eiléan Ní Chuilleanáin. Dawe traces the relationship between Bobby Sands’ writing and the “romantic and patriotic poetry of Ethna Carbery”. He’s a bit sniffy however about the value of her work asserting its quality is “not vindicated with the passage of time”.

There are also pieces on Stewart Parker whose “untimely death robbed Irish literature of one of its most liberated and articulate voices.”; on James Plunkett’s Strumpet City (reminding us of Rashers tragic end); and the book ends with a look at the ups and downs of literary life as seen through the eyes of Oliver Goldsmith.

While these essays are excellent and entertaining in themselves, the most substantial achievement of this book is that it will send you back to (or initiate your interest in) the writers and works that are so enthusiastically featured. In this Professor Dawe has done the Irish literary world some service.