If Ever You Go to Lubbock 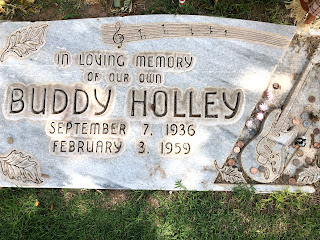 On holiday in Austin to enjoy the music scene there, I take a detour to Lubbock to visit the Buddy Holly Center and his grave. Lubbock is deep in the heart of West Texas so it’s a flight rather than a drive from Austin. The cotton has just been harvested in the endless flat landscape that surrounds the town so we fly over a patchwork quilt of bare brown and green fields, many curiously circular. Lubbock is an agricultural city with a thriving Texas Tech campus. It’s very spread out and gives an impression of emptiness - there seems to be almost no street life. In the Depot area we walked around a series of  empty streets (including Buddy Holly Avenue) and encountered nobody except a postal delivery woman and a crazy lady collecting rubbish. An occasional car passed on the long wide streets. It’s as if a smart bomb had been detonated killing all the inhabitants but leaving the buildings intact.

The Buddy Holly Center is a neat one story building that once functioned as a railway depot. It’s very well organized and the creators have managed well to depict a life that didn’t last long enough to leave much tangible evidence, apart from the music. The most poignant exhibit is no doubt his trademark black-framed glasses that survived that stupid plane crash – where an inexperienced pilot flew them into the ground during a snow storm. There’s also his motor-bike bought after the first serious money arrived with the success of That’ll Be the Day. Other poignant exhibits included some early drawings and a couple of clay figurines he made for Echo McGuire, a high-school girl-friend. There are plenty of guitars also and numerous photographs. Well worth a visit. We took an Uber out to Lubbock cemetery to visit the grave. The graves are afforded as much space as the houses in this spread-out city. His grave is marked by a small rectangular metal plate with his name spelt correctly. He was born Holley but an early Decca contract got it wrong and so he stuck with Holly as his stage name. His father and mother are buried alongside. Both lived into their 80s – suggesting that longevity would have been part of his heritage.

On our walk that morning we passed an interesting looking Spanish bistro – La Diosa Cellars. Sick of the barbecues, burgers and fried chicken on offer elsewhere we made a reservation. It turned out to be a little gem. It was very creatively decorated declared with lots of decent art (lots of Frieda Kahlo portraits) and vintage furniture. The menu embraced a huge variety of Tapas (wild-mushroom risotto, l’escargot etc.) and best of all it bottled its own wines – so we got our first reasonably-priced bottle since we came to Texas (€19 for an earthy Rioja). I thought there was only one reason to go to Lubbock – now I know there are two. 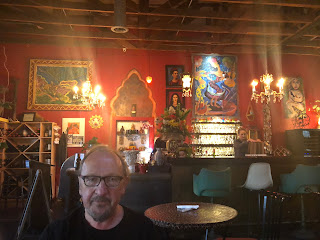