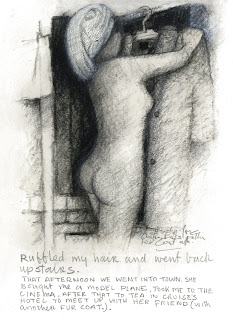 An edited version of this review appeared in the Winter 2018 edition of the Irish Arts Review.

Don’t be alarmed by the title – although it has its erotic moments this is not a book to be kept hidden under the mattress. It’s an illustrated collection of biographical vignettes from the Limerick artist John Shinnors. It’s far from a comprehensive memoir or an autobiography, Shinnors aim is to entertain us by recording some piquant adventures and memorable moments. Many of these  stories could explain the origins of recurring motifs in his work. Or they could be the old rogue indulging in a little judicious myth polishing. For example, we are told that when he was a child of two he’d stare for hours at a picture of cattle on his bedroom wall. These were the same friesians whose black and white patterns would feature in many of his subsequent adventures in the art world. His abiding interest in the female nude (frequently confirmed in this book) could likewise be attributed to a childhood experience  when his father’s younger sister treated him to an early vision of the  unclothed female body. The frisson from that early encounter can still be felt in his recollection.

Dogs also feature. The ISPCA may be alarmed to hear that he wiped his brushes on  his beloved Jack who lay beneath his easel while he painted. He also trained this useful dog to bark whenever he heard the word Picasso. There are macabre moments as with an acquaintance’s suicide where the blood spatter on the wall was likened to an abstract expressionist painting. A variation on the theme of Rothko’s suicide. His penchant for black humour is further in evidence in his account of being given a free hand to paint a mural for a local psychiatric hospital. The resultant image was a dark and sinister depiction of three witches that can hardly have comforted any of the poor souls confined therein. It didn’t last long on the hospital wall but Shinnors has reproduced it in the book for our delectation.

There are certain episodes that will titillate the interests of a Freudian analyst. When his father tore up some of the budding artist’s nude drawings, which he had secreted on top of his wardrobe, his response was to pinch his favourite pipe and toss it into the brimming Shannon nearby. Food for thought there. The stories have the added charm of being written in the artist’s own hand, lending them the verisimilitude of a diary. Entertaining though these vignettes are, the book’s main attraction is the series of sumptuous drawings that accompany them. All his recurring tropes are on view and then some more. There are nudes, badgers, kites, swallows, friesians, drawings of family and friends, and a number of moody self-portraits. Gandon Editions have solved the annual Christmas present conundrum for the art lover in your life. This beautifully illustrated book, with a gold-embossed black cloth cover retails at a surprisingly modest €18.