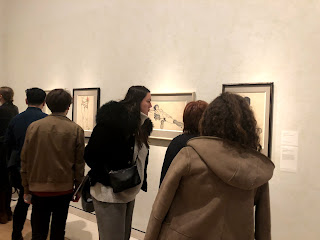 Off to London last week for our bi-annual feed of Shakespeare with a bit of art thrown in. This time it was Macbeth at the Barbican – starring Christopher Eccleston and Niamh Cusack. It was a fresh and innovative production – but not too innovative. The witches were played by young girls in bright red dresses – the contrast between their doom-laden predictions and their youthful appearance added an extra layer of creepiness. The permanently on-stage porter acted as a kind of mute chorus – chalking up the deaths and casting a rueful eye on the machinations around him. Eccleston is more soldierly than cerebral as Macbeth and that fits well generally but slightly undermines the great final speech where the tortured soul tips into nihilism. I wasn’t convinced at all by Niamh Cusack as Lady Macbeth. She lacked the passion and visceral feel that you’d want from the character. She just seemed too actorly and RADAish for my liking. The running down digital clock centre stage was presumably a nod towards “the last syllable of recorded time” and signified time running out for Macbeth. The rest of the cast were fine and professional and we noted again that the casting rules governing racial quotas were strictly observed by the RSC. I’m not convinced that 12th century Scotland was so heterogeneous. Another minor irritation is the mixing of 20th century clothes with 12th century weapons. I don’t mind experimentation but would like a production occasionally to adhere to period dress. It’s been a long time since I saw one such from the RSC.

I do love Egon Schiele so the Schiele Klimt Drawings show at the Royal Academy was a must. However, like any major show in London it’s a pain in the arse trying to deal with the crowds. The only way to get a bit of peace to enjoy the work is to book the very first slot – or maybe the very last. We went early on Sunday but struggled to enjoy the work for the crowds. Also, there is a slight frisson of unease about looking closely at some of Schiele’s more explicit and erotic works while an elderly matron breathes down your neck. Or the feeling of being a bit creepy if you linger too long when there’s a younger woman nearby. We finely tuned aesthete’s should be above such considerations of course. I loved especially Klimt’s Lady with Cape and Hat and Schiele’s drawings of his mother Marie and his wife Edith.

But God London is a hard city. Getting around is a nightmare. The Tube is dirty, overcrowded and frequently requires serious route marches to change lines. Taxis are overpriced and the traffic is permanently grid-locked. Uber works well but its prices fluctuate wildly. Having breakfast one morning I checked a route and the fare was £9 – five minutes later it quoted me £18 as demand apparently rose. Of course my cause was not helped in the transport area by arriving over the Black Friday weekend.

Relief from the struggles with traffic and culture was provided by a visit to Da Mario’s in Endell Street (Covent Garden) where we enjoyed a splendid Italian meal in the buzzy family-run restaurant: Ravioli Cinghiale preceded by lobster bisque. Nice.