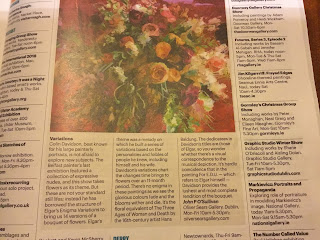 The following panels appeared in a slightly edited form in the Sunday Times Culture magazine in November and December 2018.

Colin Davidson, best known for his large painterly portraits, is an artist who is not afraid to explore new territory. His last exhibition featured a collection of expressive nudes and his current show represents another change in direction with flowers as his theme. But these are not still lifes as we know them. He has borrowed the structure of Elgar’s Enigma Variations to bring us 14 variations on a bouquet of flowers. Elgar’s theme was a melody on which he built a series of variations based on the personalities and foibles of people he knew (including himself and his wife). Davidson’s variations chart the changes time brings to these flowers over an 11-month period. There’s no enigma in these variations as we see the glorious colours fade and the blooms wither and die. It’s the floral equivalent of The Three Ages of Woman and Death by the 16th Century artist Hans Baldung. The dedicatees in Davidson’s titles are those of Elgar so you wonder if there’s a visual correspondence to the musical depiction. It’s hardly coincidence that in the painting For E.D.U. (which refers to Elgar himself) Davidson provides the lushest and most complete rendition of the bouquet.

Peripheries curated by John Daly of Hillsboro Fine Art is an exhibition of 14 paintings featuring three artists (all with connections to Dun Laoghaire): Paddy Graham, Eddie Kennedy and Sinéad Ní Mhaonaigh. The show is dominated numerically and in terms of scale by Paddy Graham’s large canvases. His works are more scenes of conflict than artful confections. Stark figures strike anguished poses against a distressed grey background. There are lines of text here and there that can assign cryptic context to an image (“Study after Caspar David Friedrich”) or provide an ironic counterpoint (“The lark in the morning” beside a tormented figure). Eddie Kennedy provides shelter and respite from Graham’s existential struggles with his calm and ethereal landscapes, inspired by his regular visits to the West of Ireland. Paintings such as the gorgeous Tondo are not realistic landscapes but rather represent the artist’s emotional response to it. Sinéad Ní Mhaonaigh’s Achar could, with its predominant grey and its figurative elements, almost be a benign Paddy Graham painting. However, her second work, Untitled, brings us into the world of pure abstraction where we must find our own way through the swirling chaos of colour

Still lifes of flowers may seem a bland and decorative art cliché to some. In Nick Miller’s impressive new show they are transformed into tragic emblems of our impermanence. Painting flowers is a race against time - they begin to die as soon as they are plucked. Nick Miller began to explore and record this process in his “Vessels: Nature Morte” paintings in 2013. This followed a residency in a Sligo hospice - mortality was on his mind. Following the subsequent death of his  parents he has continued with this theme in “Rootless”, his first exhibition for the Oliver Sears Gallery. The flowers depicted are again on the turn, losing their bloom. The fairest things having their fleetest ends. These flowers have a strong, visceral presence and looking at the bowed heads in Fuschias you sense in them the transitory nature of life and of beauty. His theme is made explicit in Seaweed Ascophyllum which suggested to the artist his dying mother’s hair. Miller is an admirer of the great Jewish philosopher Martin Buber who encourages an open and receptive relationship to art rather than an objective and judgmental one. The elegiac beauty of these works will certainly reward the engaged viewer.

Pat Harris – The Weight of Light

Pat Harris has come home after a successful academic career in Belgium. Since returning he has developed an affinity with North Mayo where he now lives for much of the year. He has moved through the genres as a painter: from portraits, to nudes, to still lifes and now to landscape - taking inspiration from the rocks and stacks and the swirling mist around him. His evocative titles hail the rugged grandeur of Kilgalligan, Stonefield and Benwee. He also throws in an arcane art reference. The first painting you encounter is titled We Won’t Do it without the Rose – referring to a feted appearance by that great showman Jospeh Beuys at Documenta V in 1972. It’s a delicately-colored  and subtle painting of a single rose – a subject he revisits in several other paintings in the show. Most of the works are oil on linen and feature the muted colours and graceful plays of light that have been characteristic of Harris throughout his career – and are an implicit tribute to his old mentor Charlie Brady. However, two charcoal on paper works, Rock, Kilgalligan and Charraig Mhor, stand out for their dark presence and monumental implacability.

You’re sure of a big surprise when you walk into the Olivier Cornet Gallery for Eoin Mac Lochlainn’s impressive new show. The gallery is transformed  into a virtual forest fashioned from long strips of subtly painted rice paper hanging from the ceiling. You are invited to walk through it on your way to viewing his watercolours on the surrounding walls. Mac Lochlainn has changed from oil to watercolours in recent years for environmental reasons and the evidence suggests he has mastered his new medium.The title of the show is the Irish term for October and Mac Lochlainn’s aim is both to celebrate the autumnal beauty of our trees – the glorious medley of red, russet, orange and yellow – and to sound a warning about the depredations of climate change. Ten of the twenty-four paintings in the show are titled Dóite, the Irish for burned. These have a topicality he could not have imagined when he painted them. While Mac Lochlainn’s ambitions go beyond the aesthetic the quality and quiet beauty of his paintings brings its own pleasure while reminding us of the significance of trees as givers of life on our increasingly poisoned planet..