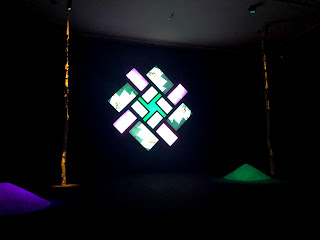 An edited version of this review appeared in the Sunday Times Culture magazine on 27 January 2019.

Brian Eno has come a long way from his early incarnation as a glammed-up synthesizer player with Roxy Music nearly 50 years ago. In addition to his pioneering work in ambient music, he’s known for his creative collaborations with such recherché figures as John Cale and Robert Fripp. Torn between visual art and music since his art school days, Eno arrived at the insight that these media could overlap and that he could make visual objects that changed in time like music. Hence his installation at the RHA where the title 77 Million Paintings refers to the ever-changing visual array he has created using computer software that generates infinite variations from a basic set of 296 images painted on slides. One wall of the large upstairs gallery has a screen featuring this kaleidoscope of abstract shapes as they imperceptibly fade one into another – accompanied by a haunting soundtrack also randomly generated. The space is otherwise in darkness apart from three mysterious mounds of pebbles lit from above and constantly changing colour. You make your way through a perimeter of 12 silver birch trees to the sanctuary of four comfortable sofas where you can immerse yourself in the infinity of images..