The Keeper - to Have and to Hold at the Model Sligo 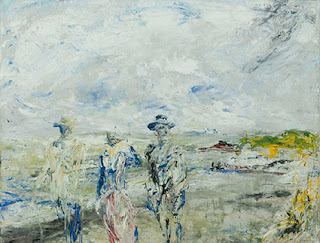 An edited version of this review appeared in the Sunday Times Culture magazine on 10 March 2019.

The Niland Collection is a monument to the will and indefatigable energy of Nora Niland – the Sligo County Librarian who started the collection 60 years ago. The Model in Sligo is celebrating the woman and her heritage with an exhibition, curated by its director Emer McGarry, that encompasses 100 works from the Niland collection together with a small and quirky selection from the collection   of former director Jobst Graeve. Accompanying these are four fascinating contemporary video works that relate to the importance of collecting and what can be lost when we don’t “keep”, or “keep” properly.

A seminal work in the Niland Collection is Leaving the Far Point by Jack B. Yeats (see above), painted in 1946 and given to his wife Cottie as a birthday present in 1947, the year before she died. It’s an imaginary scenario with Yeats, Cottie and his favourite uncle George Pollexfen taking a walk along the beach near Rosses Point – where his uncle had a house, and where the artist spent 20 happy summers. Pollexfen had died in 1910 so this much later work represents the aging Yeats looking back at an idyllic period in his life. However, the painting has a significance beyond its personal resonances for the artist. He presented it to the people of Sligo in 1954 and it was the seed from which the Niland collection emerged. Nora Niland had borrowed five other works by Yeats from the Capuchins for the inaugural Willian Butler Yeats Summer School and she decided she would like to add them to her solitary painting and start to build a Yeats collection for the county he loved so well. She raised the money by public subscription, with a little help from the Arts Council, and paid off the good friars – and thus the Niland collection was born. It now has 52 works by Jack B. Yeats – making it the most significant collection by the artist outside the National Gallery of Ireland. Niland was a determined and well-connected woman - her family owned the Niland Cash and Carry business in Galway. Money for art in the west was tight so she used her connections to approach wealthy individuals and local businesses. Arts organizations such as Friends of the National Collections were also very helpful. A major boost to the fledgling project was a bequest of 35 paintings from the Irish-American James A. Healy – a successful stockbroker. “They formed the core of the collection” according to McGarry. Another fertile source has been artists themselves to whom Niland regularly wrote asking for work. Work also arrived unbidden. As recently as last year Sean McSweeney’s family donated five paintings by the popular local artist. McSweeney was an avid supporter of the Model up to his much mourned death in 2018.

The collection has expanded well beyond its initial Jack B. Yeats emphasis and it now consists of more than 300 paintings that provide a comprehensive survey of 20th Century Irish art. Emer McGarry has gone for a salon hang format to enable as much of the collection as feasible to be put on show. The exhibition is dominated numerically by the Jack B. Yeats paintings (23 of which are displayed), many of outstanding quality. There’s a nice contrast between the elaborate formal and the fraught practical in his treatments of two funeral scenes: The Funeral of Harry Boland and An Island Funeral. The father, John B. Yeats, gets a look in with his famously prevaricated over self-portrait – 11 years labour and still unfinished. There’s also his charming portrait of a languid William B. Yeats reading in the garden. Elsewhere an exquisite small work, Grey Pool, by Sean McSweeney catches the eye. There are strong works by Mainie Jellett (Abstract Composition) and Mary Swanzy (Abstract) and women artists generally are well represented. There’s also an unusually expressive work, Bog Sun, by that purveyor of restraint and decorum Patrick Scott.

The Niland collection is accompanied by work from the Jobst Graeve Collection – on temporary loan to the Model. This featured quirkier and more idiosyncratic work – a leather jacket here, a cow’s nipple shoe there, elegant craft work, and some agitprop paintings (such as Rita Duffy’s striking Belfast Pieta). The benefactor himself features, naked of torso and full-length of pleated skirt, in a Mick O’Dea portrait that the charitable will assume is an essay in the mock-heroic.

The third strand of this ambitious and absorbing exhibition features four well-presented and accessible pieces of video art by  four contemporary artists. Sadly one of them, Susan Miller, died between the shows’s gestation and the actual opening. It is ironic indeed that her exhibit is called The Last Silent Movie. In it we hear snatches of dead and dying languages accompanied by sub-titled translations. This artist’s dying word encompassing the dying words of other civilizations and tribes.

Perhaps more pertinent to the theme of collecting is Ed Atkins’ Trick Brain. Atkins film takes us on a tour of André Breton’s Paris apartment as it was when he died in 1966. A veritable cabinet of wonders, it was crammed with weird and wonderful artifacts with a noticeable bias towards the bizarre, the African and the surreal. Bretons’s family wanted it preserved as a museum but the French government demurred and the collection was sold at auction and dispersed in 2003. Money trumps the common good in today’s art world.

Turner Price winning artist Elizabeth Price’s video A Restoration views with a jaundiced eye the “taxonomical recklessness” shown to artifacts recovered from Knossos on Crete by Sir Arthur Evans and his team during their excavations in the early 20th century. Collecting and preserving the past requires rigour and integrity – qualities that Evans appeared to lack.

The fourth video work by Taus Makhacheva tales us to a village in Dagestan where every resident is an expert tight-rope walker – a necessity more than a sport in a land of gorges and ravines. We see aerial maestros walk across a rope suspended over a gorge while carrying works of art. It’s a metaphor with many applications: art as a precarious occupation and the difficulties of building a collection being the most obvious.

Curator of the show and Director of the Model Emer McGarry emphasizes that the collection is still a living one and acquisitions will continue where funds permit. “We definitely want to add works of museum quality”. This year already it has acquired The Racecard Seller, a characterful early work by Jack B.Yeats, from the office of the Taoiseach. It’s on loan for two years but history has taught us that works loaned to the Niland Collection tend to stick around – especially if they’re by Yeats. And rightly so. They are at home. Yeats has said “From the beginning of my painting life every painting which I have made has somewhere in it a thought of Sligo”.