Back to the Curragh 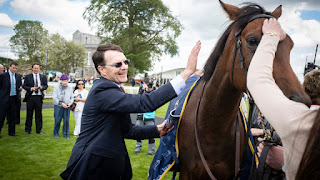 I have been neglecting my live racing in recent times – being more inclined to live in the virtual world of the Racing Post website and the ITV racing channel. I was missing those encounters with the colourful and often deluded characters that abound at racecourses and of course the proximity of the glorious beasts. So an invitation to the privileged sanctum of the Ballydoyle box, hosted by Aidan O’Brien, on Irish 1000 Guineas days was impossible to refuse.

We were a little early so decided to take a detour to the Curragh Camp where I lived until I was nine years old. Since my last visit access by car to much of the town has been restricted but there seemed no problem parking and walking around. After all the notice “military personnel only” hardly applied to me – a former NCO in the FCA and the son of a distinguished officer. I’m clearly not an ordinary “civy”.We checked out our old house, a large red-brick building called McDermot House. The only home I’ve ever lived in that boasted two staircases - one for the servants (Ok the orderly then) and one for the master and his family. It had changed. Parking lines around the house gave the first indication and the sign on the wall “HQ Support Unit” confirmed that it was no longer someone’s home. Apart from stragglers leaving a nearby church after mass, and a few figures jogging on the Curragh plains, the place was eerily deserted. I did not see a single figure in uniform. I know army numbers are down and morale is low but it was still sad to see this once thriving hub of military activity so desolate and deserted. I checked out the tall fire-station where my father had held me over the parapet (a la Michael Jackson) all the better to see the cars racing around the Curragh track that once held major motor races. I also saw the deserted shop outside which my sister Berna’s pram took off on an unplanned journey down the steep hill. I couldn’t find my old school – maybe it’s been demolished and these days the kids go off to Kildare.

On to the Curragh and its splendid new stand. Even though it was a pleasant enough day, the crowds seemed disappointingly small. Our Taoiseach was there for the official opening and he towered over the jockeys in the parade ring - a lot he knows about horses but nice to see him get away from his Kylie side. The Aga Khan was there also.  The new stand is named after him for reasons I am unaware of – perhaps just for his long service and patronage of Irish racing. He always seemed like a decent cove – lacking the haughtiness and froideur of some of the Arab owners. We were led by our sponsors up to the Ballydoyle box. It consisted of two round tables which could accommodate around 16 people. There were a few owners , a sprinkling of the extended O’Brien family, and the great man himself along with his son Joseph, and Pat Smullen who’s married to another Crowley girl . He was extremely attentive  – notwithstanding the fact that he had runners in most races and the favourite (Hermosa) for the 1,000 Guineas. He made sure we were looked after for food and drink and chatted away in the most amiable fashion. At one point he excused himself from our company saying apologetically “I must go and tack up for the next race.” He duly won the big race and his wife Anne-Marie Crowley insisted that we join them in the winner’s enclosure along with the might of Coolmore – John Magnier and his entourage. A treat indeed for a racing fan. Afterwards we all came back for more tea – no sign of champagne or any riotous celebrations despite a win that had enormous financial consequences. In addition to the  substantial prize-money a filly who wins a classic is a valuable stud option. I suppose Ballydoyle and Coolmore do it so often that it’s seen as business as usual. And of course O’Brien famously doesn’t drink. There was plenty of wine there but it seemed no one was interested (except me – but I don’t like drinking alone).

The most memorable thing about the whole encounter was how genuinely self-effacing and modest O’Brien is. And he has plenty of cause not to be so. He could be considered our greatest racehorse trainer ever, with the possible exception of his namesake Vincent. He’s been much more successful internationally than Vincent but the latter operated in an era where travel wasn’t as stream-lined. And of course Vincent proved his versatility at Cheltenham and Aintree as well as the Curragh and Epsom. In later years Vincent developed a certain hauteur which Aidan certainly doesn’t possess. Those who know him speak of his work-ethic and his genuine love of horses – the attendant stuff is to him an irrelevance.