Life above Everything: Lucian Freud and Jack B. Yeats 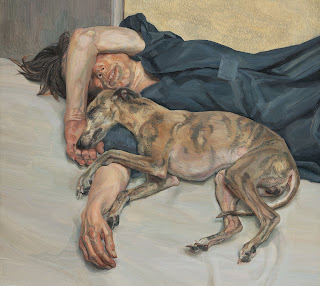 A lightly edited version of this review appeared in the Sunday Times Culture magazine on the 14 July 2019.


Lucian Freud and Jack B. Yeats never met although Freud claimed to have caught sight of the aging artist near Stephen’s Green in the early Fifties. He was certainly familiar with his work as he once asserted that “Jack B. Yeats is Irish art.” Also, he kept a drawing by Yeats, Dancing Stevedores, next to his bed for over 20 years – a location that ensured it was widely viewed. Freud visited Ireland a number of times between 1948 and 1956 usually with a woman or because he was pursuing one. (One of the latter was Lady Caroline Blackwood, a cousin of Garech Browne, who one suspects he wished he’d never caught.) The artists’ works crossed paths only once during Yeats’s lifetime - in the the Academy Cinema in Oxford Street, London. This was the unlikely venue for Forty Years of Modern Art, the inaugural exhibition of the Institute of Contemporary Arts (ICA) in 1948. The young Freud had a small, pastel self-portrait in the show and Yeats had a large oil called A Farewell to Mayo. The latter piece belonging to the star-crossed Vivien Leigh, a gift from Laurence Olivier.

Notwithstanding these somewhat tenuous connections, the Freud Project at IMMA enlists Jack B. Yeats to the cause in the exhibition Life Above Everything: Lucian Freud and Jack B. Yeats. The initial stimulus came from co-curator David Dawson who drew the other co-curator Christina Kennedy’s (IMMA’s head of collections) attention to Freud’s admiration for Yeats. Dawson was Freud’s studio assistant, model, friend and general factotum for the last twenty years of the artist’s life – so he should know. (Freud’s very last painting, Portrait of a Hound, features a naked Dawson and his whippet Eli.) Whatever about its slightly flakey raison d’etre, the exhibition is a delight and affords us the privilege of viewing a large number of outstanding paintings by these two great maverick figures of 20th Century art. And the curators have done an excellent job in creatively exploring the many affinities that can be found, especially in subject matter, when you look across their respective oeuvres. An interesting side show is the fact that seven of the works by Yeats in the exhibition were selected by Freud at various auctions for a friend who was a collector.

Both artists were figurative painters at times when representation was passé.The exhibition hangs together by exploring certain figurative themes and subjects they had in common. These include self-portraits, double portraits, figures in landscape, windows, and horses. Freud scores heavily in the self-portrait department. The Yeats work is a stilted graphite image of the young artist posing by an easel. Nothing is being given away here. In contrast we get two wildly varying self-portraits by Freud. One in his early flatter style shows an idealised portrait of a handsome and rather cruel looking young man. The other, Reflection 1985, painted in thick impasto depicts a sinister and energetic Freud – right out of Dorian Grey’s attic. The two artists intersect most obviously in their love of animals – especially horses. It’s interesting to see that of the seven Yeats paintings selected by Freud at auction, four of them feature horses. The Flapping Meeting would certainly have resonated with him. Freud might have viewed human flesh with a jaundiced eye but when it came to animals his affection shines through. Look at the loving portrayal of the sleeping whippet in Double Portrait, its paw draped over the girl’s arm. There are two paintings of horses by Freud in the show, although one (Skewbald Mare) seems more an exercise in tonal contrasts than the study of a horse. He painted dogs more frequently probably because he could work with them in his studio – Freud was a very studio-bound artist. He had a fraught relationship with horses in other ways - going through through vast amounts of money feeding a largely unsuccessful gambling habit. Yeats grew up amongst horses on his uncle George Pollexfen’s property in Sligo. They featured in his work throughout his career and the exhibition shows the transformation that took place in how he represented them as he moved from his illustrative style to the looser and expressive style of his later career. His early horses are seen going about their workaday business, hauling goods, transporting passengers, or at the races. In later years they become less prosaic and are transformed into symbols of freedom - manifestations of spirit and energy. Compare the working horses in The Ballina Car with the magical, mystical creature in On the Way to the Sea. The exhibition contains many fine examples of Yeats’s treatment of horses  and it allows us to test Frank Auerbach’s claim that “Yeats’s are the best paintings of horses ever made.”

If one were to find fault with what overall is an immensely enjoyable and thought-provoking exhibition it would be at the inordinate number of grim-faced Irishmen on display. Presumably these were included to emphasize Freud’s love for Ireland and all things Irish. Many, such as Two Brothers from Ulster, seem stricken by what can best be described as sitter’s ennui. Freud labored long and painstakingly over his work and a sitter without a rich inner life may have struggled not to look pissed off. Man in Silver Suit is another example, or the miserable duo in Two Irishmen in W11. Although the latter work is redeemed by the view of Freud’s hinterland in West London from the large window. There are two portraits of Donegal Man in the show, probably one too many. This is no ordinary Donegal man but the high-profile property developer Pat Doherty, a man not unknown to NAMA. He runs Harcourt Development and was responsible for the Titanic Quarter in Belfast. Doherty paid £4.5 million for the two paintings. A painting of Doherty’s friend Andrew Parker Bowles (a director of Harcourt Development) by Freud fetched €28 million in 2014, so this is one piece of speculation that the property tycoon need not regret. While Freud’s later portraits are all-too-human, slabs of flesh, Yeats goes more for character and expression. Compare Freud’s Irishmen with two works by Yeats in the basement area of the gallery. The Rogue shows a young man lounging luxuriously in a bar, a pint of stout beside him and an expression that shouts out “untrustworthy”. Useful shows a boxer sitting in his corner and his expression tells us he’s clearly in command of the fight.

The title of the exhibition comes from a letter to Yeats from Walter Sickert in which he described Yeats’s practice as pursuing “life above everything”. He roamed the country with his ever-present sketchbooks drawing inspiration from all around him and preserving what he saw in watercolours, notes and drawings.  He depicts people and animals in the midst of life – in action. Freud in contrast paints arrested life. There is also a costive, enclosed, feel to a lot of his paintings. He admitted as much describing his work as  “purely autobiographical – it is about myself and my surroundings”. This difference is made explicit in Dead Cock’s Head and in his superb death-like Portrait of his Mother Sleeping. Contrast these cruel almost lepidopterous works with the joy and energy in Yeats’ truly wonderful painting Left, Left, We Left Our Name on the Road. Get up to IMMA and see for yourself.