Who is Joaquin Sorolla? 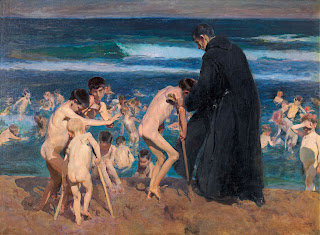 A slightly edited version of this review appeared in the Sunday Times Culture magazine on the 18 August 2019.

Who is Joaquin Sorolla? As recently as 1989 only a few specialists in Spanish art might have had the answer to that question. Sorolla (pronounced Soroya) became popular in the century between Goya and Picasso and then almost overnight seemed to vanish. Two major exhibitions in New York in 1989 at the IBM Gallery of Science and Art  and at the Hispanic Society of America headquarters in New York City helped revive interest in an artist who had been largely forgotten. And yet less than 100 years earlier he enjoyed world renown showing 500 works at a Paris exhibition in 1906, 280 in Berlin in 1907 and 356 in New York in 1909. There was an attendance of 169,000 at his New York  exhibition in just over a month, in freezing February weather  – a record attendance for an art exhibition at that time. In 1908 when he put on an exhibition of over 200 paintings in London he was described as “the world’s greatest living painter”. While Picasso was burning his canvases to keep warm in a Parisian garret, Sorolla was a feted international superstar. He travelled the world, earning vast sums for his commissions – including a portrait of the President of the USA, William Howard Taft in 1909.

After his sudden death in 1923 Sorolla’s reputation went into a sharp decline.  He was perceived as an anachronism, an artist who painted in the style of the old masters at a time when the world in general and the art scene in particular was undergoing radical change. Picasso had hit his stride and the art world embraced Cubism, Dadaism and Surrealism. Also, Sorolla's later subject matter seemed frivolous in a Europe devastated by World War I and the rise of Fascism.  The exhibition currently running at the National Gallery of Ireland and shown earlier this year (with some minor variations) at the National Gallery in London is his first major retrospective in this part of their world. So only Irish art lovers who have been fortunate enough to have visited the Museo Sorolla in Madrid are likely to be familiar with Spain’s most succulent impressionist and proclaimed “master of light”.

This exhibition is a snapshot in 52 paintings of Sorolla’s career: his early social realist works, his genre paintings, his Spanish scenes, his bourgeoisie on holiday celebrations and his portraits. He established his reputation in the 1890s with his paintings of social themes. Another Marguerite! which set him on his way by winning a medal at a national exhibition in Madrid shows a dejected woman sitting in a railway carriage accompanied by two Civil Guards. She has killed her new-born child and is facing the consequences. The name Marguerite is a reference to Gounod’s opera where the heroine kills the child born after her seduction by Faust. Other works in a similar vein flowed. The pedantically titled And They Still Say Fish is Expensive! shows a badly-injured young fisherman being tended by two older colleagues – the composition echoing classical scenes of Christ taken from the Cross. A notable work from this period is Kissing the Relic – a depiction of everyday life in Valencia. A queue of mostly women in beautifully detailed costumes line up to kiss the relic of a saint held by a priest. Amidst them an altar-boy holds a tray of holy images for sale. Many of these social realist paintings were domestic in scale to facilitate sales to the middle-classes.

Sorolla’s major break-through came in 1900 at the Universal Exhibition in Paris. Works from each country were displayed in national pavilions. Sorolla’s monumental Sad Inheritance! won the Grand Prix – suggesting a preeminence amongst his Spanish peers. This painting, which dominates the NGI show perhaps because of its scale, shows a large black-clothed priest assisting a crippled boy into the sea. They are surrounded by a group of naked and clearly handicapped boys. This work will surely cause an atavistic shudder in an Irish audience: the looming black soutane and the naked damaged boys. This was Sorolla’s last big painting with a social theme. It was however a harbinger of things to come. It depicted children playing in the sea which subsequently became one of his most visited subjects – albeit without the dark presence of the priest.

As Sorrolla’s reputation in Spain grew and his fame abroad spread his subject matter grew sunnier. A superficial flit around the NGI exhibition might suggest an artist whose work was dominated by paintings of light dancing off a placid sea and children playing on the beach – the bourgeoisie at leisure. These were the paintings that caused Monet to describe Sorolla’s paintings as “Joyous, in the sunlight above all.” Such works proved extremely popular and provided a lucrative market for Sorolla turning him into a very rich man. He worked quickly, usually in the open air, and if he couldn’t finish a work in a day, or emulate the conditions the following day, he would abandon it. A contemporary critic William E. B. Starkwater described his facility as an artist: “He grasps in a few searching strokes an accidental movement, a fleeting expression, a retreating wave. There seems to be no mistake, no undoing.” Along with these sun-lit renditions of carefree life Sorolla embarked on a steady stream of valuable portrait commissions.

Sorolla was in thrall to Velázquez. He visited the Prado Museum in Madrid a number of times between 1882 and 1884 and made a series of copies of works there by Velasquez and the other masters. Later on in 1904 he returned there as his fame and consequent portraiture commissions increased. He focused on Velázquez’ portraits and specifically on Las Meninas which was the inspiration for some of his group portraits. His painting The Family shows the most direct debt. His fascination with the artist drew him to England in 1902 purely to view the Toilet of Venus (the Rokeby Venus) at Rokeby Park in Durham. He would view it again in 1908 after the National Gallery had acquired it. So taken was he by the work that he sent a postcard of it to his wife Clotilde describing it as “the most human piece of flesh in the museum.” His gorgeous, lubricious Female Nude in the NGI exhibition shows Clotilde emulating the pose of Velázquez’ Venus. All attendant detail has been removed so the emphasis is on the sensuously presented female form, pretty on pink silk sheets. Sorolla was coy about the identity of the model but the glint of the wedding ring on the model’s finger gave the game away. Goya was another Spanish master that Sorolla referenced. Maria with Mantilla is a clear homage of his predecessor’s Duchess of Alba – although Sorolla’s Maria is decidedly less haughty looking – more 20th Century.

The crowning achievement of Sorolla’s career was a series of paintings called Vision of Spain which was commissioned for the Hispanic Society of America in New York in 1908. These 14 panels were 12 feet in height and 200 feet in combined length. They depicted the peoples, costumes, and traditions of various regions of Spain. Sorolla commented prophetically that the series represented a Spain “on the point of disappearing.” He worked on them continuously from 1912 to 1919 and many believe that the stress of completing them contributed to a decline in his health. He died in 1923 after a stroke at the age of 60 and sadly never saw the murals installed.

There are those who may quibble at the NGI charging €15 to view an artist with whom few outside the art world are familiar. I would point them towards Sewing the Sail a virtuoso painting of dappled sunlight and complex tonalities that emanates a sense of warm community. One of many master-pieces in the show. As we reach the fag end of another dreary Irish summer an hour or so spent in the company of such joyous sun-kissed celebrations of life is a pleasure beyond petty mercantile considerations.