Groveling and Patronising on ITV Racing 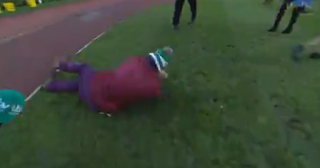 Those of us who follow horse racing were not at all surprised to see a clip of Matt Chapman from ITV having a good old grovel in the presence of Sheikh Mohammed on the BBC Panorama program about Princess Latifa. Chapman’s cheeky chappy, anti-establishment, man-of-the-people persona is transformed into craven deference when he encounters Arab royalty. Mind you the Queen too is happy to receive the old brute at Royal Ascot notwithstanding the UAE’s attitude to kidnapping and basic human rights. Of course the racing industry here and in the UK is highly dependent on Arab largesse. Unemployment in County Kildare would rise sharply if Sheikh Mohammed packed up his tents and left. In recent years Saudi Arabia has joined Dubai as a lucrative venue for horses, jockeys and trainers from this part of the world. It hopes that through sport we will think they’re all fine chaps really and that we will ignore its tendency to murder dissenters, cage its women and exploit its third-world labor force. Our governments will not speak up – especially the Brits who supply them with weapons to terrorize their less fortunate neighbours in Yemen. ITV Racing gives superb racing coverage and has been a life-saver to many (including myself) over the past year. Its pundits, especially Mick Fitzgerald and Ruby Walsh, are articulate and informative and the elegant and knowledgeable Francesca Cumani adds a touch of glamour. However, in addition to its ridiculous kowtowing to Arab princes and the British Royal Family, I regularly pick up a whiff of rascism in its patronizing attitude to some of Irish racing’s more colourful characters – a recent episode where the Cork trainer Michael Winters was encouraged to roll around the parade ring (see above) comes to mind. More idiot him you might say but I’d like to see them try it Paul Nichols. Ed Chamberlain is culprit in chief in this regard, followed closely by nice but dim Ollie Bell. Francesca and the two small men are blameless.