Help! The New Yorker is Gaslighting Me

Those of us who read the New Yorker are aware of two singular aspects of that distinguished publication. One is its adherence to the arcane, if not archaic, practice of using diaereses (umlauts to many) in words with doubled vowels – as in reëlection. A silly affectation to some, a charming idiosyncrasy to others. The second is its punctilious fact-checking – a commendable practice in this era where any disagreeable news can be deemed fake. However, my recent experiences with The New Yorker have told me that not all parts of the organisation function with the same rigour as its editorial department. Read on.

I have had a subscription to The New Yorker for many years, along with subscriptions to the New York Review of Books and the London Review of Books. Last summer I decided to cancel my New Yorker subscription for a variety of reasons. Too many magazines to catch up on was one reason. Also, the delivery of the New Yorker had become very erratic, none for weeks then three together, then another out of sequence and so on. No doubt a Covid-related problem or fall-out from Trump’s efforts to fuck up the U.S. Mail. Also, I wasn’t reading many of the long format pieces in which The New Yorker specializes. Often I just wasn’t interested in the subject matter. I always enjoyed David Remnick’s opinion pieces and anything by Adam Gopnik, John Lee Anderson and Janet Malcolm and I still read the book reviews, the film reviews and the wonderfully esoteric restaurant reviews but I just wasn’t getting enough out of it. So I decided to cancel my subscription. This took effect from mid-September 2020. I got a barrage of emails subsequently urging me to renew and then silence.

Last month I was very uncharacteristically checking my AMEX statement when I was surprised to see a charge on the 17th December for $199.99 for The New Yorker (see image below).  Easily sorted I tell myself and call AMEX. That’s when my heartaches began. AMEX tell me that they will set up a dispute process but that it could take weeks to resolve so the easiest thing to do is call the New Yorker and they’ll issue a credit. I crank up my Skype application and call the New Yorker (no free-phone number for international customers). I get on to a woman with an almost impenetrable accent who promises to investigate and call me back. She does not inspire confidence. Eventually after two further phone calls (each one requires the laborious reiteration of my problem) I am told that I will have to email my problem to the customer service department (NYRCUSTSERV@CDFULFILLMENTS.COM). A tedious business that puts the onus on me to sort out a fuckup by them. I lay out my problem yet again via email and get an email response from someone called Marie informing me that “We are unable to locate the account with the information provided.” She then asks me for my full address which has already been included in the email I already sent her – and which is clearly visible when you scroll down from her reply. We went back and forth a few times and eventually on 28th February I got a response from someone called Marcy saying:

Thank you for contacting The New Yorker. Our records show your subscription expired with the September 14, 2020 issue. We are unable to locate your credit card payment so we cannot process a refund. Please contact your credit card company to research and reverse the charge.”

So I’m sent back to AMEX. The New Yorker can’t locate the credit card account from which it has received $199.99 – the money has gone from my bank account through my direct debit with AMEX. I call AMEX again and  they say fine we’ll fix it but it will take 6 or 7 weeks.

Then on the 2nd February I get this email, not from my old buddies in customer services but from The_New_Yorker@e-mail.condenast.com:

Thank you for continuing your subscription to The New Yorker. We value you as a part of our community of readers who appreciate distinctive coverage of politics, international affairs, arts, culture, business, science, and technology, as well as fiction, criticism, and, of course, cartoons.”

They are clearly trying to drive me crazy. I tell them so via email.

The maddening thing about such egregious mistakes is the amount of time I have to spend trying to sort out their problem. Calls to AMEX, calls to The New Yorker, endless emails from different people in customer services. And still no resolution, no apology, and no refund yet for the money taken from my account. 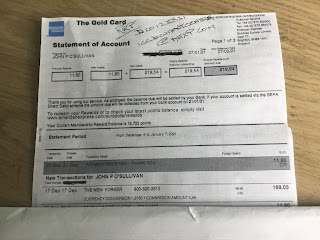