Nihilists at Work in South Dublin: Review of Here Are the Young Men by Rob Doyle 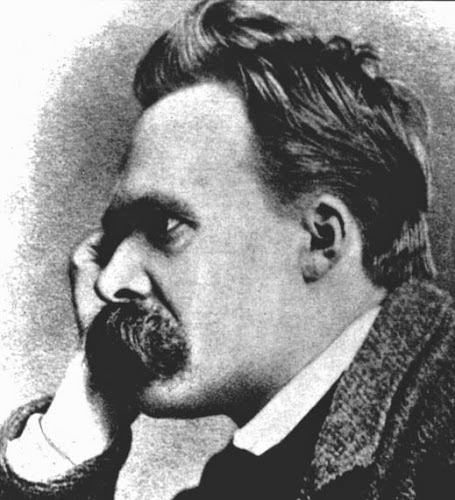 The spirit of Nietzsche looms over the action in Rob Doyle's darkly exhilarating first novel. But don't be alarmed, the book's intellectual architecture is well concealed beneath the boozing and braggadocio of its protagonists. The nearest we get to an explicit acknowledgement of the great German thinker's influence is Scag's philosophical riff half way through which contains a tasty chunk of Nietzsche's apocalyptic prologue to Thus Spoke Zarathustra - unattributed but with added 'fuckin's.

The novel portrays the antics of four epically disgruntled teenagers in that hiatus between sitting the Leaving Certificate and heading off in the directions designated6 by their results. You may acquire a hangover just by reading about their drug-fuelled ride through late Celtic Tiger Dublin. Drugs and drink are constantly sought and consumed and most of the action stems from their effects. Getting wasted is the one solid ambition they all share. But the boys behaviour is dictated by the cosmic squalor all around them. They are living in the twilight of the idols. God is dead, school is out, Church and State have failed them - the robber barons rule the land. Their irreverence and frantic drinking is a way of dealing with the void. Beneath the surface hedonism there is a dark undercurrent of seething emotions where terror, despair, and violence lurk. We know what we're in for as soon as we reach the fly-leaf. There's a quote from E. M. Cioran - a man famous for bemoaning the "inconvenience of existence". These youthful nihilists casual misogony is only trumped my their sustained misanthropy There are a few superficial similarities to the novels of his namesake Roddy, a writer admired by Rob. They share an ear for dialogue, particularly the oath-laden demotic of Dublin. However while Roddy has colonised the north side, Rob's characters roam between Greystones and Tallaght - with frequent excursions to Temple Bar and to Killiney Hill and its environs. These are south side boys but definitely not D4. One of the quartet's mother is a cleaner for God's sake. This is different territory in other ways also, a realm beyond good and evil.

Early on we encounter a spectacularly vile anti-Bono tirade that will give plenty of readers pause. But these are just the spewings of Kearney the book's resident psychopath. He will get his comeuppance. He's just reflecting darkly the level of invective often directed by Dubliners at this amiable and enormously successful rock musician. Pure Paddy begrudgery. And if that scene disturbs you wait until you get to the snuff movie description.

In addition to the juvenile nihilism of the four characters, there is an attendant sexual anxiety that afflicts all of them except, ironically, Cocker. It's as if this last avenue to escape and transcendence is also closed to them. Matthew is weak and vacillating and he knows it - he has moral fibre issues. He's also timid with girls and when he finally gets his much sought after Jen to bed discovers that he can't perform - not surprising perhaps considering the volume of drugs he has consumed. This is a horror for any man but for the shy teenager it's a trauma that ruins everything. Jen is unfazed by the sexual failure that blights his love for her. The girls in this novel are very relaxed about sex and its trappings compared to the boys. His later encounter with her and Kearney in flagrante merely compounds his misery and rage. This is a tragic unresolved love story at the heart of the action. Cocker seems to be benignly indifferent to the girls. In fact the Cocker character is the least well-drawn of the four, as if Doyle needed a foil for the erratic antics of the other three. He alone doesn't enjoy his own chapter headings which are divided between Matthew's first person agonising and the third person descriptions of the deranged Kearney and the over sensitised Rez. Kearney has a violent streak that emerges early on. He is obsessed with ultra violent computer games and creates alarming personal web cams. His attitude to girls is brutal and pragmatic, date rape is to be admired and eventually practised. Rez is the smartest of the four. He agonises about the human condition and raises the conversation above the bestial level struck by Kearney. His girl-friend dumps him all the better to frolic abroad with a clear conscience and when he discovers her emails to a friend gloating about her pleasuring by some holiday-camp Lothario he is quite undone - most particularly by the unfavourable comparisons she makes with his own sexual ministrations.

Half way through Doyle introduces the book's most likeable character, the old punk and stoner socialist Scag - who "dreamt of the day when the working classes refuse to work". He acts as Matthew's mentor and guide around Dublin in a way that faintly echoes Bloom and Daedulus's more restrained peregrinations. He points Matthew along the path of true stoner righteousness, which means avoiding a career at all costs.

The novel turns even darker in the latter stages. A trip to the US exposes Kearney to a snuff movie and he returns to Dublin with his vicious urges cranked up a few notches. The occasional outbursts of casual violence become more regular and more extreme - his inner psychopath comes out to play. He tricks Matthew into complicity in one of his crimes and from there things escalate to a murderous and fiery denouement - in Greystones of all places. This is a fine debut from Doyle. It shines a light into a relatively unexplored region: the psyches of our youth, adrift in a world where the old verities no longer exist. And its fast-moving episodic structure makes it a rollicking good read. God may be dead, but a new literary star is born.

Posted with Blogsy
Posted by Ardmayle at 5:35 PM