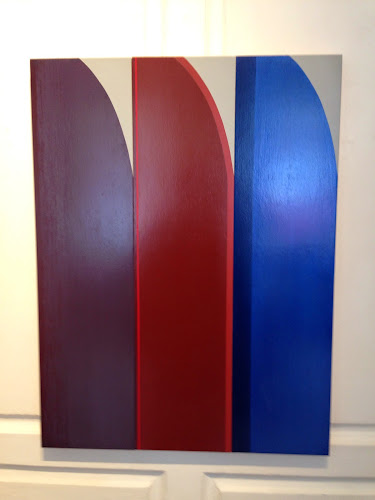 
For a man who loves surfing as much as Tom Phelan it must be frustrating to live in Vienna where the mild beauty of the Danube hardly compensates for the spume filled thrills of Strandhill. But Phelan is an artist and the pain from his thwarted love affair with the waves has been transmuted into an arresting and colourful series of paintings in his new show at the Molesworth Gallery. Quiver, the title of the show, refers to a collection of surfboards of different size, shape and vintage. A surfboard is a fetish object where the aesthetics of the board are as important as its function and this gives Phelan an opportunity to play with its alluring geometry and brilliant colouring. The ambiguity of the term quiver also conveys the oscillation between abstraction and reality - between colour field and figurative. Phelan uses Casani birch panels for these paintings and the grain of the wood plays its part in the images - as well as recalling the early wooden surfboards. The surfer's field of dreams, the sea, also features in this impressive show.

Posted with Blogsy
Posted by Ardmayle at 10:24 AM