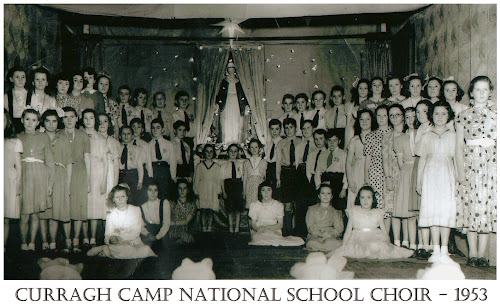 When I was seven or eight years old (top row four to the right of icon) we lived in the Curragh Camp where my father, an army officer, was stationed. Down the road from our house was a large swimming pool. It measured 40 yards by 14 yards making it the largest in the country at the time. The army used it for recreation and for training its soldiers. I frequently went there on my own as all of my schoolmates were the sons of private soldiers or NCOs, and officer's sons and soldier's sons didn't mix in those socially stratified days. I had never had lessons and so just paddled around in the shallow end - enjoying the novelty of being immersed and the smell of the chlorine. One day as I was leaving the pool area to change, four soldiers in uniform decided to have some fun at my expense. They grabbed a limb each, swung me back and forth a few times, and launched me into the middle of the deep end. I came up to the surface, screaming and promptly sank again. Luckily there was someone in the pool nearby and he pulled me out - deeply traumatised and crying hysterically. The four by now discomfited villains tried to placate me and followed me into the changing room to console me while I got dressed. When I was ready they escorted me to a nearby sweet shop and asked me what I wanted. The price of my silence was to be two marshmallow mice - a sweet shop option long gone. When I got home I kept my little misadventure to myself and never told anyone what happened. I was regularly bullied at school because of my father's rank and considered this merely more of the same.

Things rested so. I tended to avoid occasions of swimming. However when I was around 14, we went on holiday to Spanish Point - all nine of us. My parents enjoyed the use of a house there for a month. Most days us children went to the beach, one of the most lethal on the west coast, while my parents spent the day golfing at nearby Lahinch. A lot of convents had summer houses nearby and you'd see the nuns in their long black swimming costumes lying on the rocks like so many seals. Paddy Hillary, Minister for Education at the time, also had a house there and I'd often see him on romantic walks arm in arm with his wife.

There were life-guards on duty at the beach but only during certain hours. These I suppose were the hours to which we should have confined our swimming. One desultory afternoon I made my way alone to the beach and started paddling off some rocks. The rest of the family were playing games in the sand dunes. The area was deserted apart from a solitary girl reading on a rock nearby. I paddled out up to my shoulders and then must have stepped off a ledge because suddenly I found myself out of my depth. I bobbed to the surface and yelled out. The girl was off the rocks in a thrice and she swam over strongly and pulled me to the shore. If she hadn't happened to be there I would surely have drowned. Thank you again Irene Kerrison. Of course I never mentioned this incident to my parents either.

You'd imagine that I would subsequently have learned to swim but despite trying on many occasions I have been unable to conquer my fear of water. I can swim on my back as long as I remain in my depth but just cannot put my face in the water. It's beyond cure. As a result of my handicap I was always very aware of keeping my children away from water when they were young lest I find myself in a situation where I would be unable to rescue them. As soon as was decent from an age perspective we got them regular lessons from a very accomplished teacher. Now they are all very strong and confident in the water and can rescue their far from amphibious father if the need arises.

Posted with Blogsy
Posted by Ardmayle at 8:41 AM