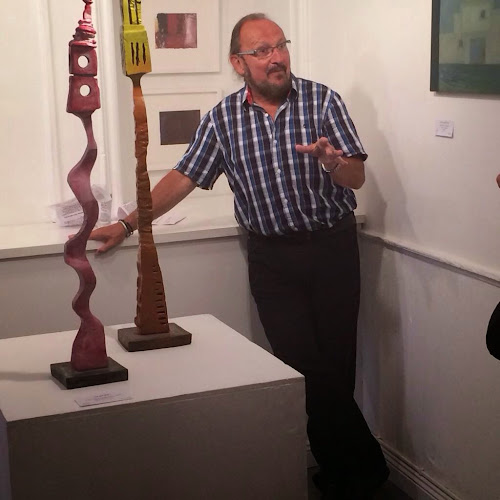 
For those here who may be unfamiliar with the Dublin art scene, Taylor Galleries had an interesting genesis. You could argue that it started life as far back as 1944 when Leo Smith founded the Dawson Gallery on Dawson Street. Over time, especially as post-war austerity ended, it became the only game in town for the upper echelons of Irish artists, especially in the 60s and 70s. There was some opposition from the David Hendriks gallery but Leo was the king, and the kingmaker. To get a gig with the Dawson Gallery was the ultimate imprimatur - you had arrived, you were a made man, or woman. John Taylor was his young fresh-faced assistant, and in the latter period of the Dawson Gallery's life, Pat began to get involved also. Leo Smith was a bon vivant with a heart condition and while returning home from the funeral of Hilary Heron in Pat Scott's car, he had a heart attack and died. Smith was a confirmed bachelor and had no family to take up the business. After a very brief hiatus, the Dawson's stable of artists, rousted up by Pat Scott, threw their lot in with John and Pat and in 1978 Taylor Galleries was born - in 6 Dawson Street. In 1990 Taylor Galleries relocated to smaller premises at 34 Kildare Street before moving up the road to the current space at 16 Kildare Street in 1996.

The gallery's artists at the time of Smith's death included such blue-chip names Louis le Brocquy, Tony O'Malley, Bill Crozier, Sean McSweeney, Pat Scott, Michael Farrell, Camille Souter, Sean McSweeney, and Charlie Brady. Their reputations and sales were growing. This was a mighty fine legacy for a young gallerist. Many of these artists are now dead, but the Taylors didn't just sit on their laurels - they took care of the future by bringing in the next generation of artists such as Charles Tyrrell, Martin Gale, John Shinnors, Mary Lohan, and of course John Doherty from this parish.

Amongst Dublin galleries Taylor Galleries stand for quality, a certain professionalism and an adherence to the traditional values of drawing and painting. They are certainly not afraid of abstraction as Charles Tyrrell's work will attest, and they regularly experiment with younger artists but they have a good nose for bullshit. The Kerlin may give you a scantily clad woman drawing shamrocks in green paint with her arse and a catalogue to explain what you're seeing but the Taylors can be relied upon to give you something that can be appreciated without the attendant essay. I have dealt with them as a buyer, a seller and an occasional reviewer and I have always found them to be decent skins. I remember many years ago I put together a group show, not unlike this one, at a gallery I owned in Enniskerry. I had sourced most of the work directly from the artists but was shy a couple of Sean McSweeney's to round off the show. Sean, whom I know well, had nothing available so I went along to John and asked him did he have anything in stock. He took me up to a storeroom on the top floor of the gallery - chock full of goodies - pointed to a half dozen SM's and said "help yourself". Nice guy. Another time I had bought a John Shinnors piece from a photograph (don't do that by the way) and I was very unhappy with the framing and scale of the piece and wanted to return it. It was taken back without demur and my money refunded (don't do that either).

On the way here from my sister's house on Barry's Road I passed that beautifully located cemetery overlooking the harbour. It occurred to me how Jim O'Driscoll resting in there would have enjoyed this occasion and this gallery. While he lived a lot of the year in Dublin, he had a house in Rossbrin where he spent the summer resting from his legal labours. I would frequently encounter him mooching around Schull at a loose end - separated from his beloved galleries. For the rest of the year if you wanted to meet Jim, Taylor Galleries on a Saturday morning was a reliable bet. He would spend hours in there chatting with Pat and John about the state of the art world. He had a particular affinity for the Taylor's stable of artists and if you visited his house on Orwell Road you would encounter work by Louis le Brocquy, Tony O'Malley (especially) Bill Crozier, Pat Scott, Charlie Brady and many more. Jim was an insatiable buyer of art and would probably have single-handedly kept this gallery financially viable.

I have been coming to Schull for more than 25 years, and I have been spending time in Taylor Galleries for nearer thirty. So I am delighted with this marriage between two of my favourite places. The advent of the Blue House gallery has certainly enhanced the cultural life of Schull. I know that John, Brian, Alyn, Keith and John have put huge time and energy into the enterprise. It makes a stroll down the Main Street that much more interesting, and Schull a more attractive venue for holidaying. It has also taken advantage of the standing army of artists in this region to ensure that we don't have to travel to Dublin to or Cork to enjoy their work. Many of the Taylor artists have Cork connections - John of course, Charlie and Tim in Allihies. And of course Pat Scott, who helped broker the Taylor take over of the Dawson Gallery was born up the road in Kilbrittain.

With the right support from you the Blue House Gallery can be a permanent feature of the Schull landscape. So roust up all your promenading barrister friends, your drinking doctors, your holidaying fat cats and the gilded remittance men that throng the streets in July and August and get them in here buying art.

Walking into this show is for me like walking into a party and finding it full of old friends - tried and tested over time. There's Micheal, there's Mary, there's Tony. I hope you enjoy their company as much as I have done.

Posted with Blogsy
Posted by Ardmayle at 8:47 PM