My Mother Made me a Gambler 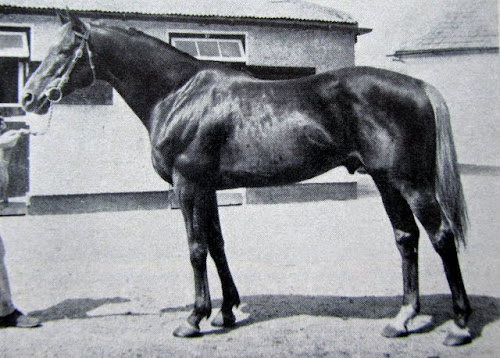 An edited version of the following piece was published in the Sunday Times on the 30th June 2014.


In 1953 I was living in the Curragh Camp - my father, a commandant in the Army, was stationed there. Our back garden opened out onto the sheep clad Curragh plains and as a child I wandered far and wide - without hindrance from my hard golfing parents. Donnelly's Hollow was a favourite resort. I'd follow Dan Donnelly's painstakingly recreated footsteps into the centre of the natural amphitheatre and imagine that famous fight with Englishman George Cooper in December 1815.

Further away lay another sporting venue - the Curragh racecourse. One July day in 1953 I made the trek across the plains with my mother to watch the Irish Derby. Only many years later did I realise what an infamous day it would turn out to be. The royal trainer Sir Cecil Boyd-Rochfort had sent over Premonition from his Newmarket yard. My mother, a life-long gambler on cards and horses, defied Gloria Steinem's judgement that "Women's total instinct for gambling is satisfied by marriage". She had a bet on Vincent O'Brien's horse Chamier - influenced no doubt by his stable's location not far from her birth place in Cashel. She also put a shilling on for me. Premonition won with Chamier a close second causing my mother to utter her trademark oath: "the curse of the seven snotty orphans on it". However, shortly afterwards a Steward's Inquiry was announced. There had apparently been some interference between the two principals. These days, when it takes gross interference to affect a result, it would have been thrown out. But back then stewards were more prone to exercise their power and they decided to favour the local horse. A decision that left Boyd-Rochfort fuming and resolving never to race again in Ireland. So enraged was he that he bought newsreel film of the race and had it shown for a week at cinemas around Newmarket.

My mother was well pleased of course and gleefully handed over my eight shilling winnings. I must have been a sanctimonious little prig in those days because I spent my ill-gotten gains on plaster statues of The Sacred Heart and the Blessed Virgin. These statues adorned my mantelpieces, piously, and then ironically, for many years afterwards – growing increasingly chipped and grubby. An objective correlative to their owner's moral decline.

That day a seed was planted that flourished and I became, and remain, a regular and unrepentant gambler. At school later on in CBC Cork I'd hurry across the road to Donnelly's Bookmaker's with my friend Don Murray to catch the first race before afternoon classes resumed. The betting shop was owned by the father of Joe Donnelly, also a bookmaker, but best known for his phantom art gallery on the Vico Road. Over the years there have been highlights: Anglo in the Grand National at 50-1was one and on a famous day in 1963 I encouraged my entire class to back Monawin, successful in the Lincoln at 28-1. My worst day was the one I offered the same class 10-1 against Cassius Clay in his first fight with Sonny Liston. There was a standing ovation when I slunk into the classroom the following morning. I was paying the jubilant wretches off in order of size over the next six months. I remember fondly old handicappers like Be Hopeful, Old Tom, and Damredub (trained by Towser Gosden, father of the far grander John). And a cautionary tale: Years ago I flew to Los Angeles on business and was sitting next to Dermot Weld at the front of the plane. He was the most affable of companions and we discussed art and horses the whole way over. He told me proudly that he'd qualified as the youngest vet on record in Ireland, and urged on me the virtues of Vitamin E for horses and men. On parting we exchanged tips. I told him to buy John Shinnors' paintings and he suggested I back a horse called One More Round - running in Galway the following week. His horse started favourite and finished last - carrying my very substantial bet. Shinnors went on to become, for a while anyway, the darling of the auction houses. Maybe I should stick to the art.

Posted with Blogsy
Posted by Ardmayle at 4:29 PM