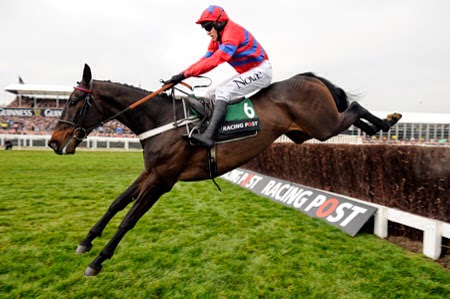 Yesterday was the most memorable day's racing I can remember - Mullins' achievments were truly historic and the quality of his Grade 1 winners was exceptional. On the betting front I broke even thanks to Sizing John's 33-1 third and Polly Peachum's agonisingly close second. I had another second in Thomas Crapper but Theatre Queen sadly was put down after a bad fall. Jezki was a huge disappointment in the Champion Hurdle and clearly he was an inferior winner last year.

But hope spring eternal in the bosom of the bettor so off we go with Day 2. Nicky Henderson is due a winner and Vyta Du Roc is a tentative choice in the first - Beast of Burden may also be close. In the RSA Chase I always look for course winners and Kings Palace looks best. The Coral Cup is the usual lottery but you get fancy prices so I'm going for Activial in the hope that he stays and in a Henderson outsider Hammersly Lake. I'll watch the Champion Chase and hope that Sprinter Sacre is back near his spectacular best and will steer well clear of the Cross-Country chase. I like Arabian Revolution in the Fred Winter - although I'll be pushing Barry Geraghty's luck as he rides two of my earlier fancies also. In the last race, the Champion Bumper, Dermot Weld (my old buddy) runs Vigil the horse I backed unsuccessfully in this race last year. It's most unusual for a horse to run in this race twice (they usually go hurdling) so I'm assuming Weld has a reason for returning.

Posted with Blogsy
Posted by Ardmayle at 11:33 AM