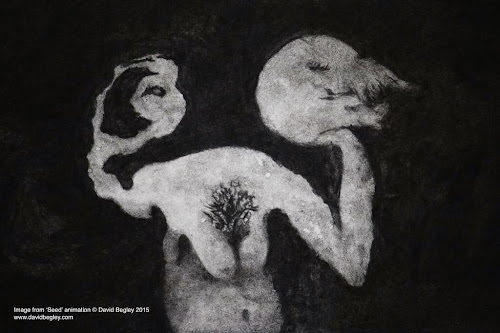 David Begley has built a reputation on his haunting and surreal charcoal drawings - one of which featured at the last RHA annual show. The eerily atmospheric animations in this show are generated from the ghosts of charcoal drawings past. An initial drawing is photographed and then slightly modified, photographed again and modified again. The animations are built from thousands of these minutely altered images. The artist has also composed moodily apposite sound tracks to accompany us on our visits to his dream worlds. The overall feeling of the show is sombre and elegiac - with more than a hint of the Gothic weirdness of Mervyn Peake. Metamorphosis is the only constant. The tender and idyllic is transformed into the sinister and apocalyptic. Certain themes recur: birth, death, and especially regeneration. In Breathe a storm-tossed sea turns into a woman who proceeds to breathe life into a variety of exotic forms. Images of moons and eggs abound betokening fecundity. The piece ends alarmingly with a wolf-like creature looming over the landscape. These works eschew narrative. They are playgrounds in which we can immerse ourselves in Rorschachian reveries.

At he Linenhall Arts Centre

Posted with Blogsy
Posted by Ardmayle at 2:24 PM