Horse at Void Gallery in Derry 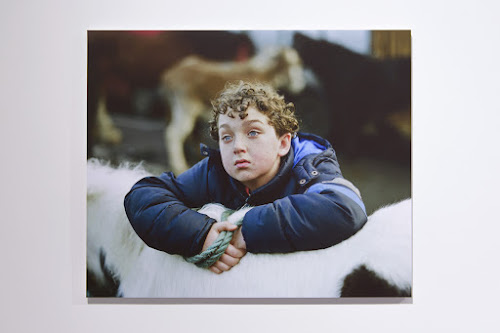 A slightly edited version of this review appeared in the Sunday Times Culture magazine on the 5th April 2015.

Entering the Void just after a visit to the Museum of Free Derry it's a shock to be greeted by the music of God Save the Queen. It's as if the city is conspiring to ensure that you balance your experiences of the two communities. (It's unnecessary really as you're beaten into submission already by the Derry/Londonderry debacle that punctuates your journey into the city.) The music accompanies Mark Wallinger's Royal Ascot, a video installation of the royal procession that precedes the racing. The artist is clearly not an admirer of this tedious piece of pageantry. This varied and entertaining show, curated by Turner Prize winner Wallinger and local curator Maoliosa Boyle, celebrates the horse through the work of 28 artists. Photography is particularly well represented both in the artfulness of Kenneth O'Halloran (above) and in the characterful reportage of Michael Conlon's Ballinasloe Horse Fair. Debi O'Hehir's striking ink drawings capture the drama of the animal in motion, Maria McKinney creates a subtle image of a horse's head through the painstaking medium of jigsaw fragments, and John Kelly's quirky paintings point to an undignified end for one of these beautiful creatures. There's also a fine Stubbs etching and some underwhelming Henry Moore water-colour studies.

Posted with Blogsy
Posted by Ardmayle at 3:53 PM