Review of: Anne Madden: Colours of the Wind - Ariadne's Thread 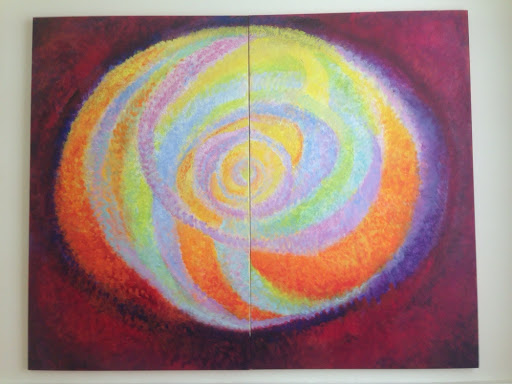 An edited version of this piece was published in the Sunday Times Culture magazine on 13 August 2017.


As the muse of Louis le Brocquy, Anne Madden’s place in Irish art history is secure. The permanence  of her reputation as an artist only time will tell. Her work has tended towards the decorative – with a penchant for large scale paintings often in dramatic colours such as cerise, magenta and orange. These are pleasing enough on the eye but somehow lacking that visceral or radiant element that constitutes the real thing. Her current show in the Hugh Lane illustrates her shortcomings. The myth of Theseus, Ariadne and the Minotaur is a dark and bloody tale of sacrifice, lust and betrayal. Its essence is hardly conveyed by a show that consists of an array of candy-coloured panels, a few cosmic streamers, and some dark intimations conveyed by a brace of horned heads. The painting entitled The Labyrinth (above) is a particularly weakly executed piece lacking both geometry and poetry. The gaudy rhetoric of these works seems unlikely to lead us to “a deeper understanding of the nature of existence” which is the artists’s aim according to her blurb writer. It also begs the question as to whether the show merits three large rooms in one of our major art museums.